When I arrived on Wed, I rode the lower Trapp Trails - easy by still fun. 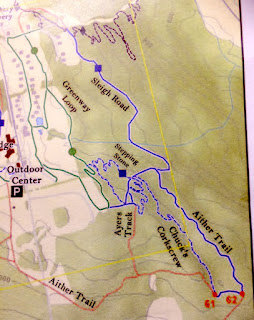 Thursday was overcast and rainy but I did manage to ride the Rail trail from Danville to St Johnsbury and back in the afternoon. That ride is detailed on my railroad related blog.

Sadly on Friday, the weather was crappy as well: cold, windy and very overcast most of the day but I finally rode Kingdom Trails again. It was 5 or six years back when I rode Kingdom with my son and its really the Mecca of Cross-County Mountain Bike Riding.

I ended up driving on every single friggin’ back country dirt road between Stowe and East Burke thanks to Google Maps giving me the shortest route (ARRGH) but by around 11 Am I was riding.

This lovely artifact was in the parking lot! 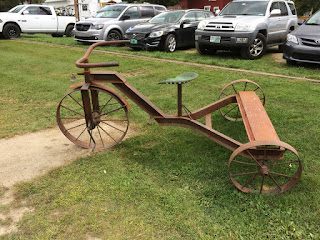 Once I signed in, as is customary, the staff gave me a map and drew a recommended route for me from my suggestions.

I then slogged up Uptown (I think that was its name). Its the new trail that keeps you off of the road for a bit, then I continued up on Herbs. At the end of Herbs, I veered south and rode Riverwood, then continued up (!) on Pines.

Oops - suddenly I realized these were the recommended trails for the long loop at the end of the day so I headed back north on Worth It then up the road to the Inn. 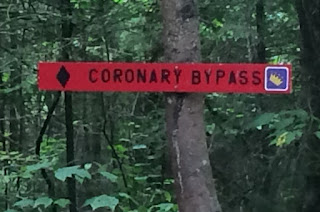 After recovering my senses (returning from Cloud Nine!)  I continued on to Pastore Point. This was one of my preferred trails cuz of all of the roots (no I am not a masochist :-) ). Took a small spill on a large root and didn't realized until later that I lost my apple that was tethered to my handle bars - oh well!

Then it was a bit of a hike-a-bike up Coronary (I was already getting a bit bushed) but I was quickly rewarded with flying down Troll Stroll (ooo yeah baby!!!).

I took a breather midway thru Eager Beaver and heard the train roll by right behind me, then it was on to Webs (required a short jog back north). I remembered this trail well from my times with my son, It is glorious!

Then a long haul on some double track (lots of hills) and although my intentions were to ride Sidewinder-- I was out of water. I had forgotten my Camelbak (duh!) and had only a now-empty bottle in my cage.

I paused at the "Market Cafe" area expecting to chow down a bit and get water but it is only open on the weekends so I hammered up Old Webs (another magnificent trail) and found water at the Pavilion. This Pavilion wasn't there year ago when I rode with my son!

A quick trek up the Chapel where the wind was practically blowing you over... 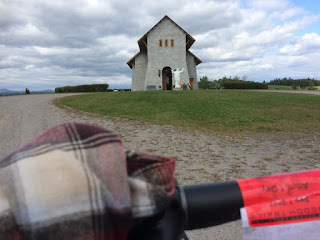 Then down to Knob and the East River Branch. For a while it was practically dark in the forest but occasionally the sun would poke thru for a bit and then disappear. East River Branch was another of the requested trails on the route and it did not disappoint!

But by this time I was getting evermore bushed (and the East River Branch Trail is notoriously up and down) so I rode the VAST easy trail all the way to Kitchell and flew down those berms like there was no tomorrow.

Once back by the car, I grabbed a beer and a burrito at the Tiki Bar and Food Truck. None of this existed years ago when I was here with my son Greg! 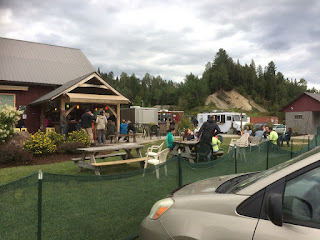 Although I didn't get to Heaven's Gate this time - it did feel as though I had reached heaven at a few points on my ride. Kingdom Trails never disappoints!
Posted by Rich Coffey at 7:32 PM 1 comment: