Another Historical Gem at Trumbull

On my mid afternoon mountain bike ride in the Valley today, I happened upon more historical remnants that's were surprisingly new to me!

These are a bit upstream from the earthen dam area and were probably supports to an underwater sluiceway that engineers could open and regulate water flow as needed. They are totally obscured by brush in the summer months... 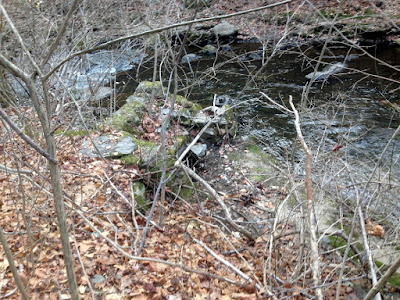 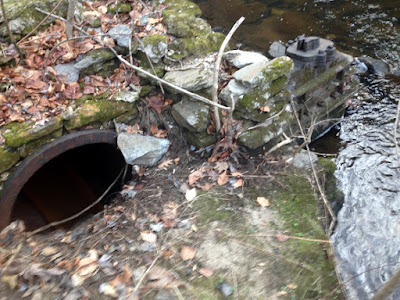 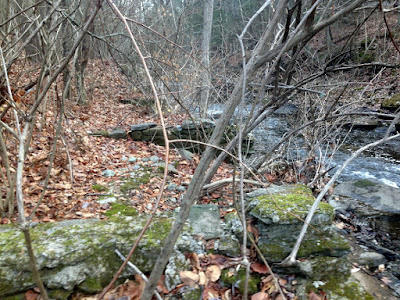 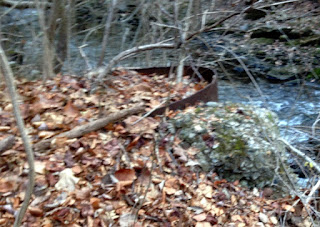 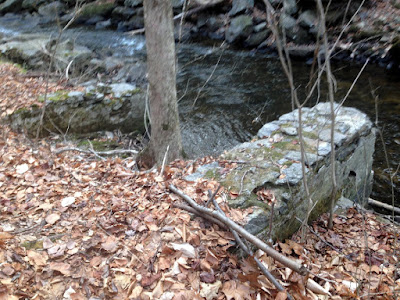 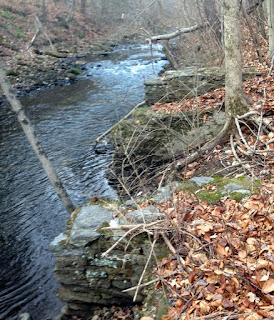 These large boulders were part of the dam which was blown apart in 1941when the lake was drained. 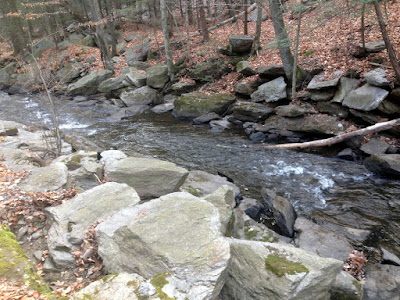 Posted by Rich Coffey at 2:39 PM No comments:

I was in upstate NY for Thanksgiving. It was too crappy a day to mountain bike so I took a couple of local treks. 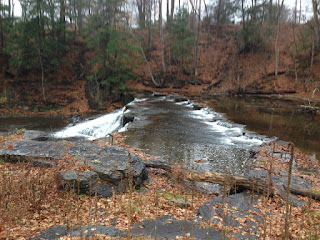 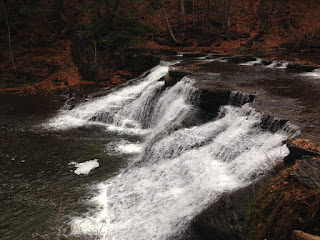 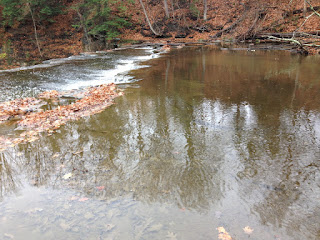 First time over a Sanders Preserve in the Glenville Hills. 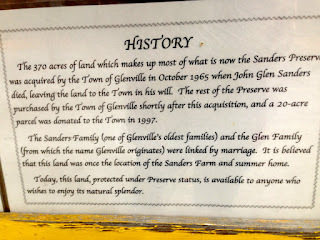 I hiked in to Zone 3 and wandered off the main trail to check out the mini waterfall and gorge. It was great! 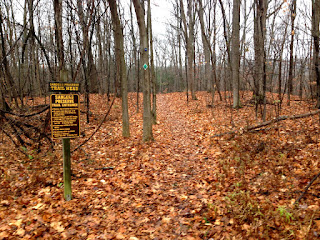 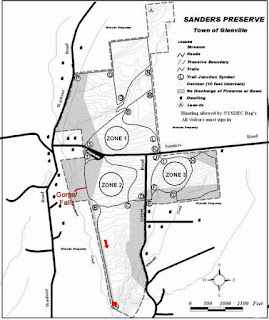 After viewing the gorge, I hiked back up to the main trail and then I hiked all the way down to the small park bench overlook but my camera batteries ran out so I headed back the same way.

This is a nice place - I will return!

Posted by Rich Coffey at 2:00 PM No comments:

No trip back to BHBL to visit my parents is complete without a hike to the creek (Alplaus Kill).
I had to work remotely the day after Thanksgiving but I took a stroll at lunch hour! 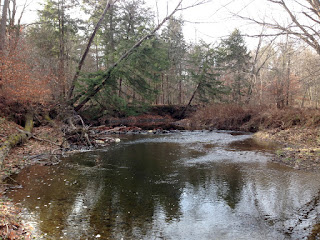 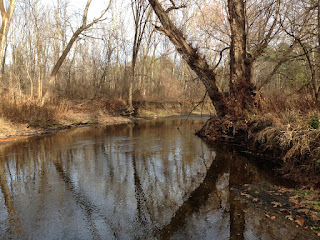 Posted by Rich Coffey at 2:31 PM No comments:

After a full belly of spicy pizza and beer - I was near enough to Mianus Park, that I decided to skip going back home for the mountain bike and hike it instead.

The hike up Indian Mill Trail on the deteriorating pavement now is plastered with no trespassing signs but its A LEGITIMATE trail! Needless to say, it would be nice to consider building a single track up the hillside instead. About 3/4 of the way up, this spot caught my eye for a trail route (Ah one can dream...) 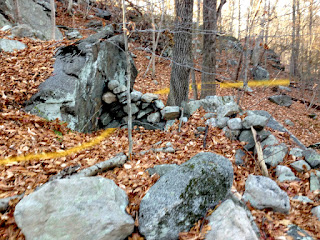 I remember this spot being all rocky and swampy - its nice to see the boy scouts put a foot bridge here... 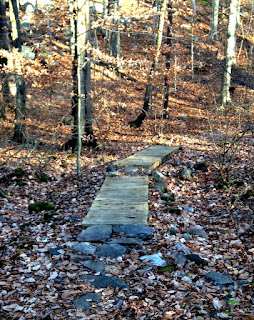 This spot is an eroded trough now - a bit of an S curve would surely be welcome at this stretch. 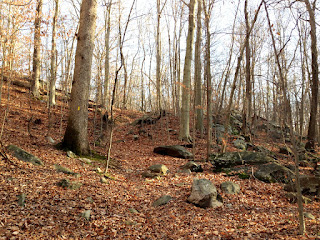 Love the old stone fences here - they are everywhere!
I bushwhacked off the main trail following some deer tracks I saw and eventually found this old carriage road... 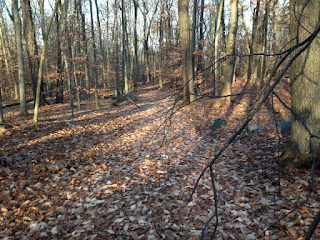 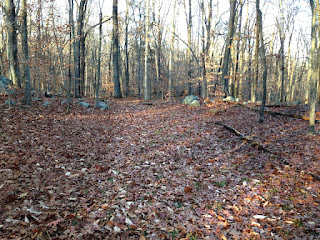 This pile of wood looked like was once an old building of some sort. The White sign says "EXIT" 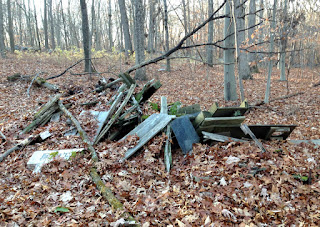 The road appeared to be headed toward the mansion so I decided the turn downhill following some more deer tracks. Suddenly 8 ft in front of me--right before I turned--about 10 or so deer suddenly bolted away--too bad I didn't have my camera ready!
I was able to follow the deer tracks downhill a bit but suddenly there was so much undergrowth I decided to turn around.
Some more bushwhacking across a clearer area brought me back on the main trail...

I never noticed how big the glacial erratic that was near to old sugar house... 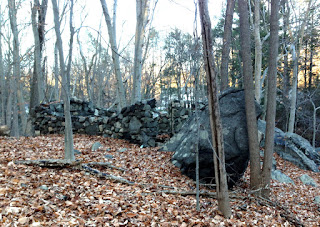 I capped off the hike with a photo shot from beneath the Merriebrook Bridge. 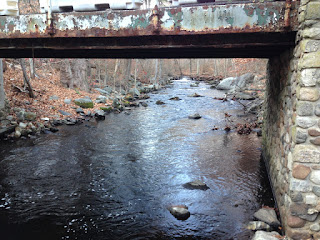 Posted by Rich Coffey at 2:55 PM No comments:

After a very productive FCNEMBA Trail building session in the morning, I decided to forego lunch and explore a bit of the northern trails in the park. At the advice of a well-seasoned local rider, I headed on south on the Orange Carriage Road and meant to turn on the White, eventually heading up to do the Purple Loop clockwise.

My "Ride"
Well I missed the turn for the White, and ended up taking the Blue instead. It was a carriage road as well but after a short bit, the single track intersected from the North so I stopped and took two photos: (1) looking back on the Blue Carriage Road and (2) Looking north on the single track I was about to ride on. 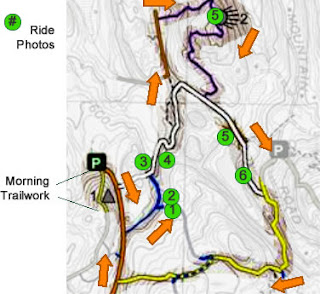 The next two photos are really indicative of the whole ride from this point on. These were barely used trails and the leaf cover (often up to two inches thick!) made finding the actual trail difficult and the traction was--more often than not--TERRIBLE!

The next section I rode--the brown-colored straightaway on the map--was a carriage road but with the thick leaf cover, even that was harder than normal to ride. I ended up riding all the way to the kiosk on Bear Mountain Road but eventually (after minutes of scrutiny looking back) saw the small bridge that indicated the start of the Purple Trail.

Due to leaf cover, the Climb was practically impossible :-) I couldn't even find the trail most of the time and there was minimal traction so it was sadly a long hike a bike. Right before you get to the top, there is an insane steep section which was mostly slick rock and I slipped once on all the leaves. At this point I was cursing!

Well the Overlook was nice - you are up over a few hundred feet. The ride down was pretty challenging (for me) - lots of shorts descents over rocky sections and with the leaf cover being so thick I didn't want to misjudge things and end up hobbling out of there with a broken ankle so I shamefully walked a lot of it. Thank God for the occasional Purple Blaze cuz I often had to stop and try going in a couple of different directions until I found a blaze.

At the bottom of the Purple, I met the White Trail (it was leafed over and very narrow but discernible) and for some reason I turned left when I should have turned right. I rode out to the Footbridge and Dam (photo below) and stupidly thinking I was STILL ON THE PURPLE, I made a right on the White thinking I was heading west back towards the car. WRONG!
Well the next section was rough and probably doable by even a weenie like me when there's no leaf cover. I was pissed off at this point anxious to get the hell out of the park at this point but I was totally confused (I didn't real know how confused I was yet!!).
Finally  I ended up on the Yellow and had to traverse the canyon which is an absolute ridiculous climb. But at this point I finally recognized where I was and knew exactly how to head out!

The cursing got much worse at the is point as I had to slog up the South side of the canyon on the ridiculously steep and super rocky Yellow Trail. Just getting a foothold on the seemingly endless leaf strewn rocks and boulders was a freaking nightmare but I made it to the top and my anger chilled a bit since I finally knew exactly where I was (I had been here before).

The next section of the Yellow was still a bitch  - better for mountain goats than bikes but once I got a bit further west - the terrain eased up and I rode out. The double blazes stopped at one point and finding the Yellow was a difficult but once back on the Yellow, it was a downhill easy ride out to the Carriage Road and the Parking Lot. Man, I was glad to see the car.

Don't ride in the late fall at places you are unfamiliar with! Due to all the fallen leaves, the trails are invisible...
Posted by Rich Coffey at 7:14 PM No comments:

It has been rainy and wet for a day or two. Today it was overcast in the afternoon but not raining so I ventured out for a hike, wisely leaving the bike at home since it would be slippery.

I hiked quite a bit of the park and visited a few spots I haven't been to in a while.

The dam looked considerably different since 2008. Many of the trees have been cut down next to the dam and a huge amount of large boulders are placed on the downstream side of the dam -- I would imagine for support.
I stitched together 4 photos to make this panorama (click to enlarge)

I traipsed up to the Cave Trail and realized it has been a long long time since I have been up there. I even missed the turn off for Natural Selection! (that's a trail we built ages ago). Here's a shot of the cave interior...

Lastly, I swing down by the river's edge off on a side trail where I never bike and hopped across the rocks to take the next shot looking upstream...
A bit further south, I took a few photos of the new hardened access and stitched together a panorama...
It was nice to be outdoors - even in the overcast conditions. Hiking gives you a chance to notice things you often miss while mountain biking. The fresh perspective was enlightening! :-)
Posted by Rich Coffey at 3:21 PM No comments: