I was curious how this park was shaping up. Although I rode Hemlock Hills in the morning, I was up in the area and not too tired to give this place a go as well…

Last year our Bike Chapter FCNEMBA got the green light from the City of Danbury to build a trail system for this park. We had built some sweet singletrack already and folks have been slowly adding more.

The ride in from the parking lot is a fire road unless you ride the newly built trail starting from the west side of the lot. I discovered this on the way back and let me tell you>> it is AWESOME. Super twisty thru the pine trees but the flow and craftsmanship of the trail is superb. Nice work Mike and crew!!!! 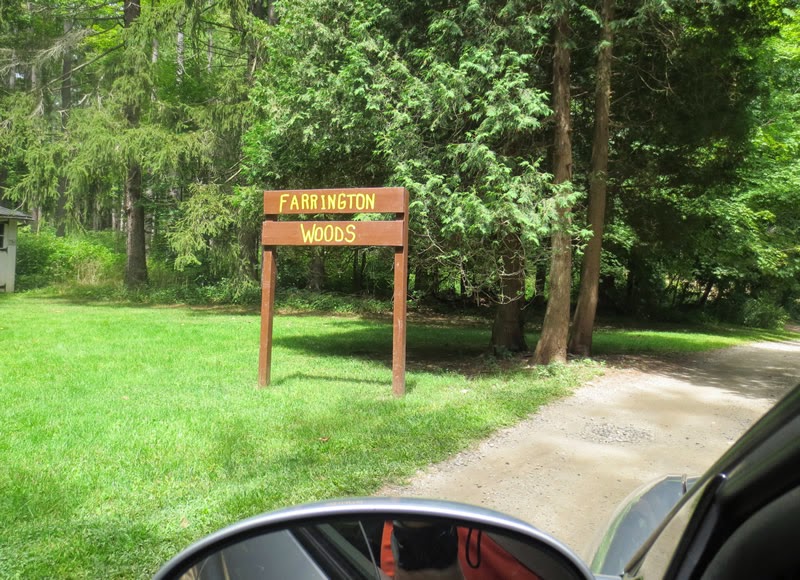 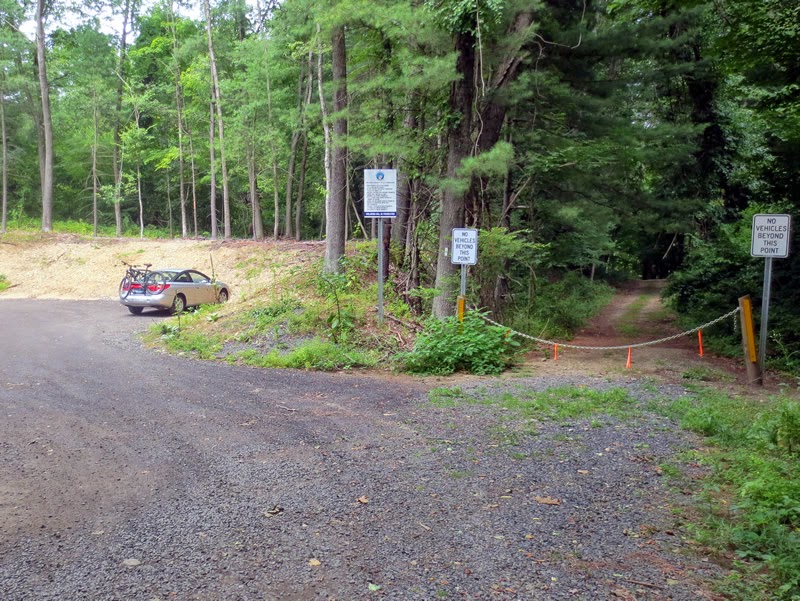 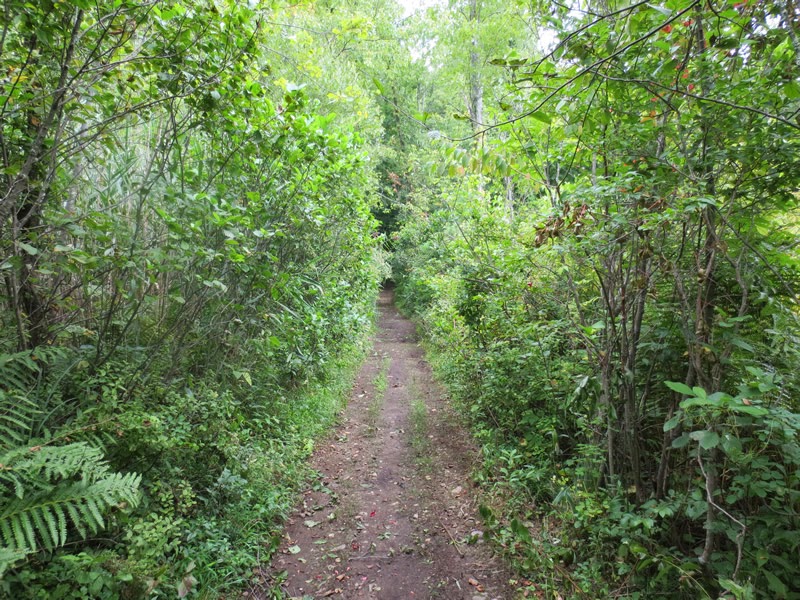 Happily, the trail we built was nicely broken in by frequent riding and what was added on was perfect! The climb up reminded me a bit of Kingdom Trails - the long section you climb after doing Sidewinder. Believe me, I am not a fan of climbing but here is great flow, the benching is perfect and climbing wasn’t difficult. Needless to say... the ride back down was a blast. :-) 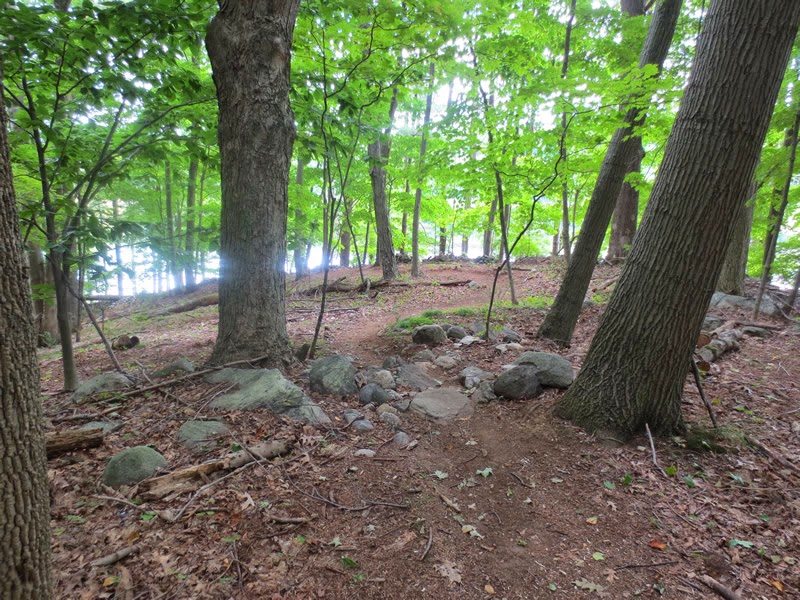 I rode up to where the benching stopped and then rode halfway back down to scoot over to the fire road. I then slogged up to the top of the mountain. It was awesome as the sun was shining and the forest was "shimmering"...
At The Summit

After I bombed back down the fire road (and then joyfully descended on the perfectly benched single track!), I headed over to the pond and checked out the old fireplace. Despite the off and on crappy clouds through out the day, by the pond it was beautiful and sunny! 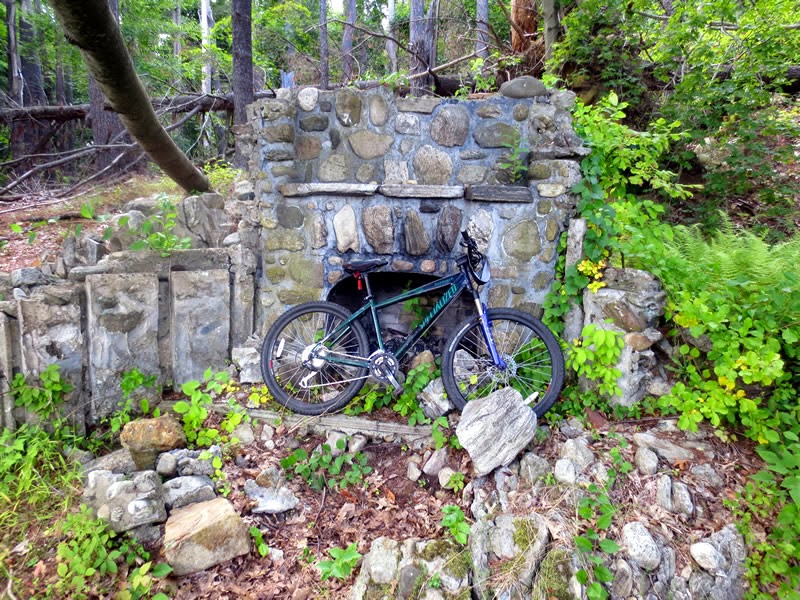 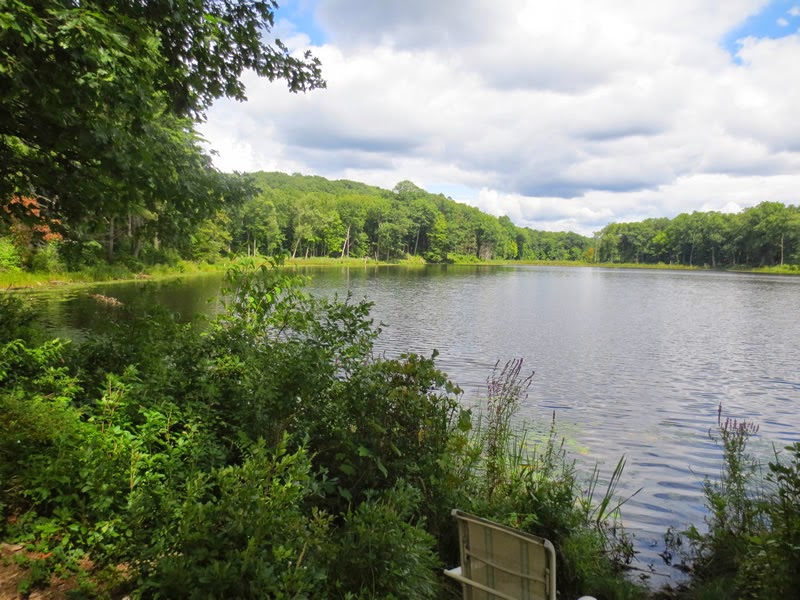 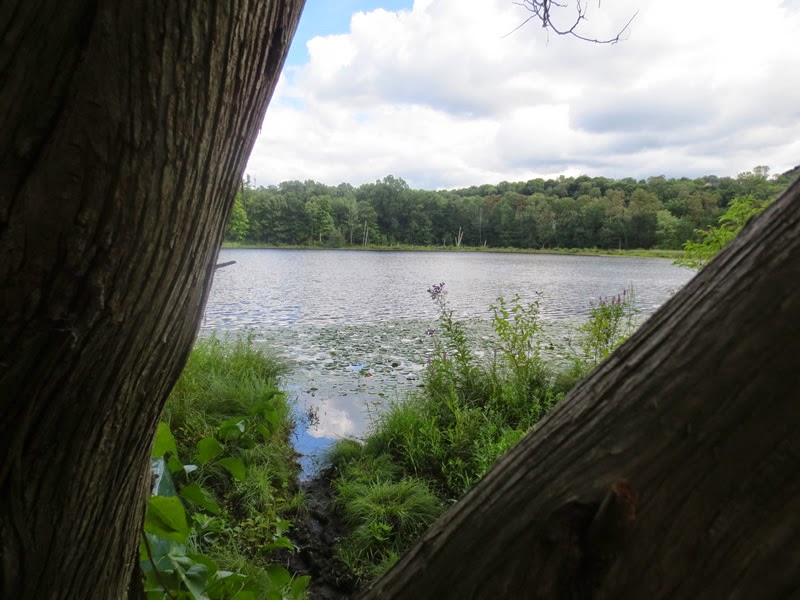 Posted by Rich Coffey at 7:55 PM No comments: 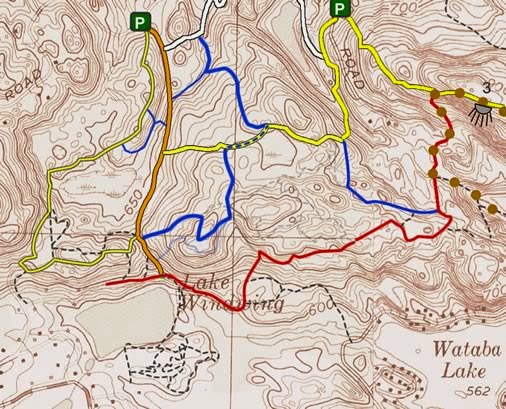 My Route Today
I got off to a decent start and got to the Windwing Trails entrance around 9 am (its close to an hour’s drive from my house). I was still handicapped by a jerry-rigged hard tail with crappy brakes (my XC bike is in the shop) but I was anxious to explore the park as I have only ridden it a couple of times and remember it being stunning.

I parked by the baseball fields and rode through the Windwing Field Loops (aerial) for starters. These easy trails were created by locals to encourage young riders to hone their skills and have fun riding together off road. 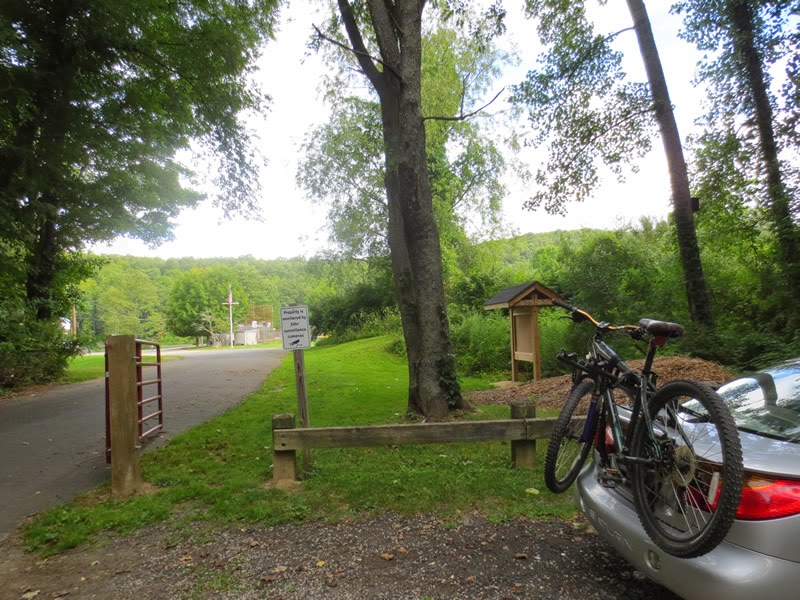 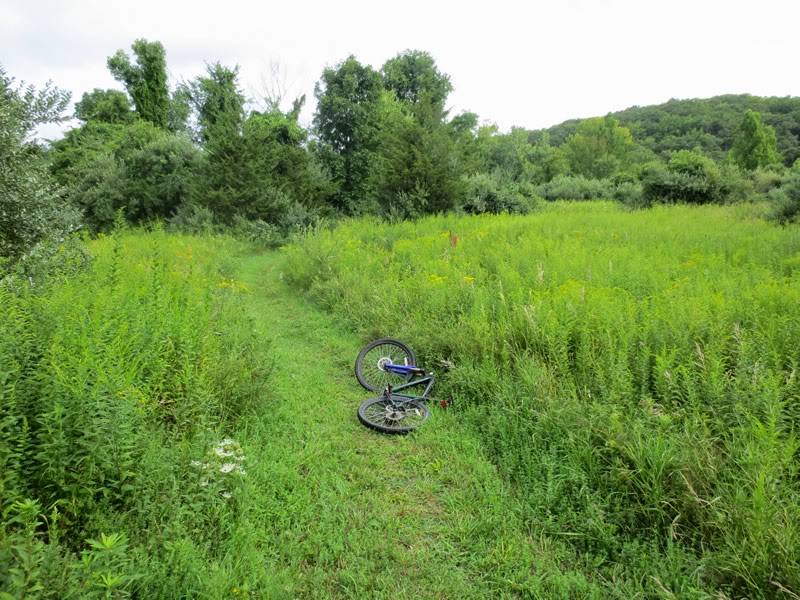 I had to stop by the lake and snap a photo... 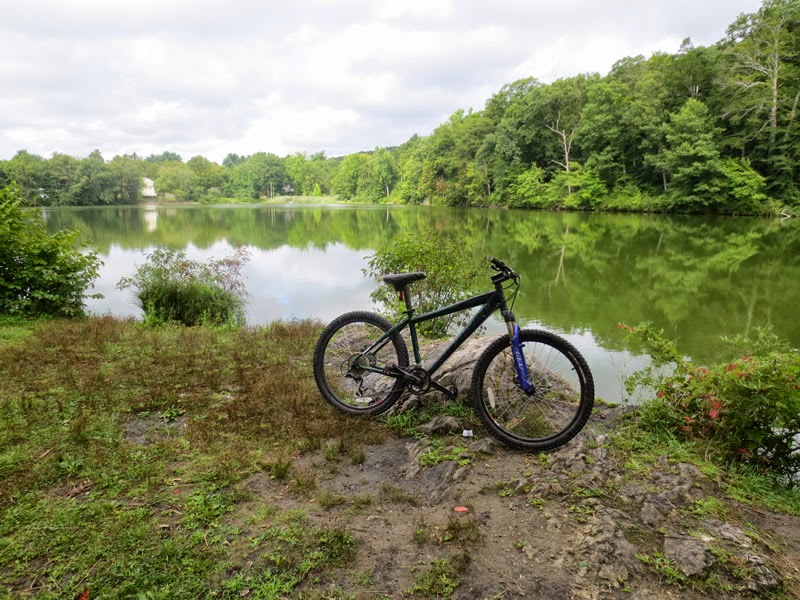 A kiosk greets you at the intersection with the Red. 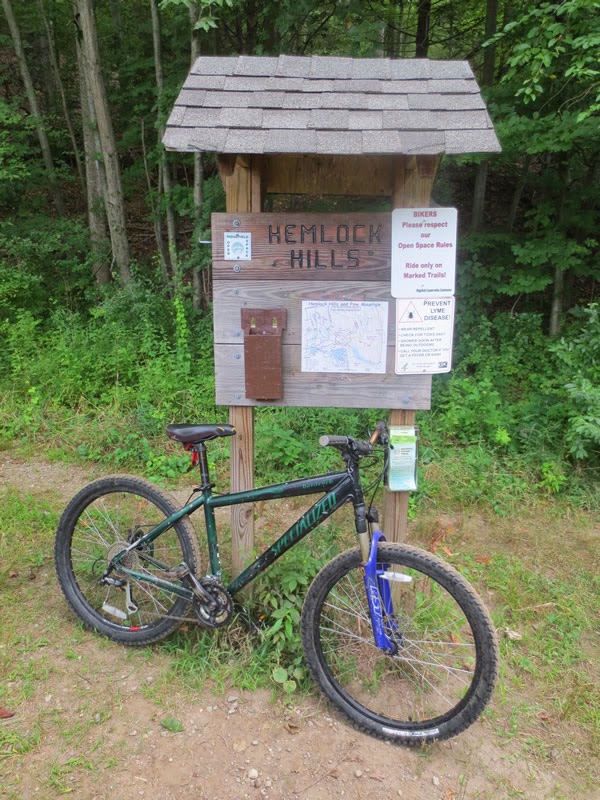 I road west on the Red by the lake and then turned around and climbed up the middle trail to get to the Orange.

Once I rode up the first hill, I then turned west on the Yellow. The Yellow was a double tracked stoney hilly jeep road. Mistakenly thinking it was the main trail (since that’s where the double track headed), I bombed down a side trail and ended up on North Shore road... (bummer!) 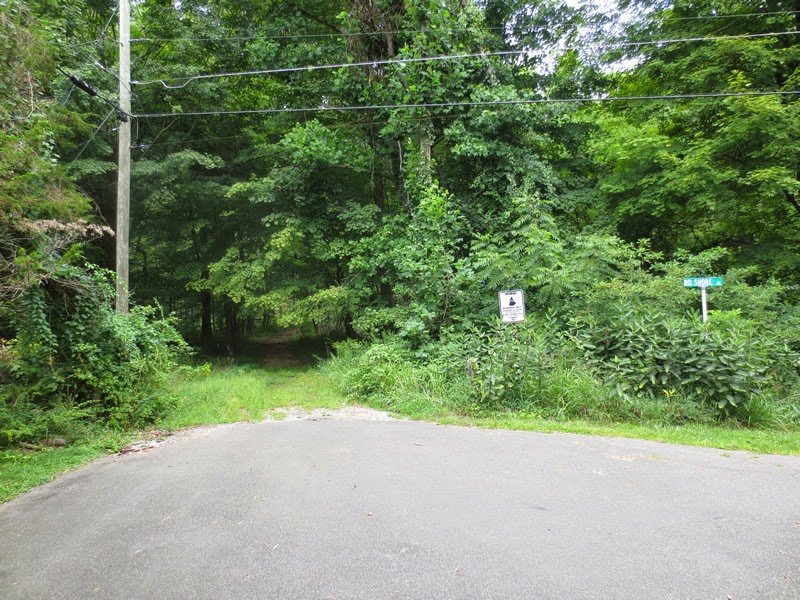 ... but headed back up and found the blazes where the Yellow turned into single track and headed up some steep hills. The trail thru here was awesome and the scenery super rugged. Massive granite cliffs loomed ahead while the trail was challenging rocky, rooty and hilly! 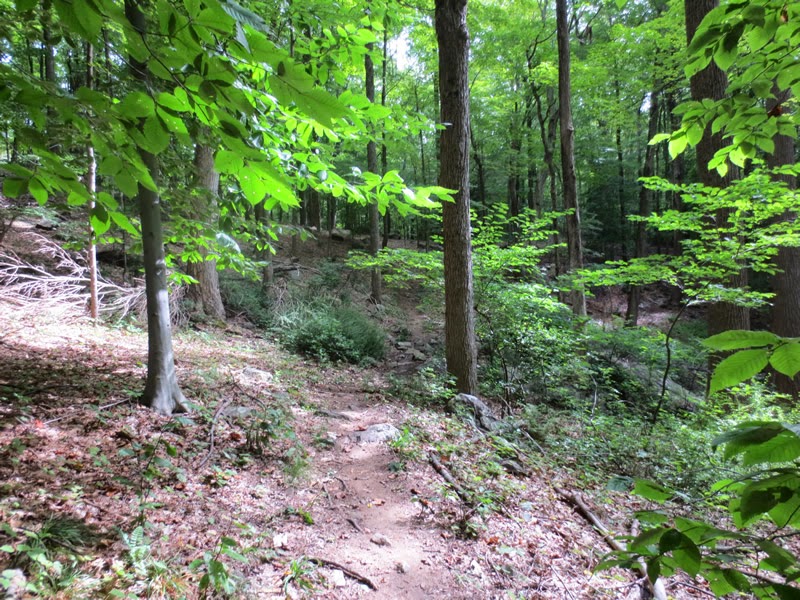 Finally right before the Yellow started plunging downward, I found the side trail going eastward. That was equally awesome and I ended back at the Orange. Getting my bearings, I headed north on the Orange double track and turned to struggle up the Yellow. After the hill, it got easier and then merged with the Blue. 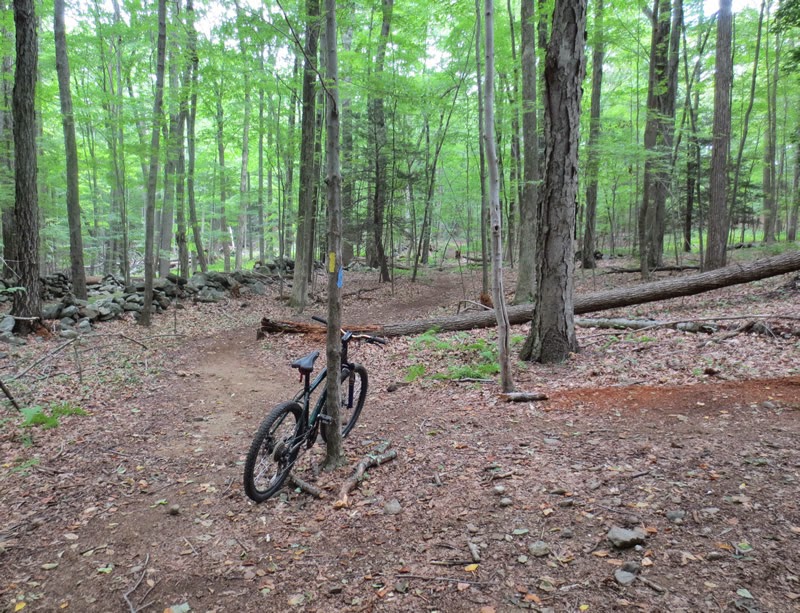 But after the next intersection where the Blue veers of the left, the Yellow to the right was an absolute beast: rocks, rocks and more rocks and I ended up walking most of it :-( 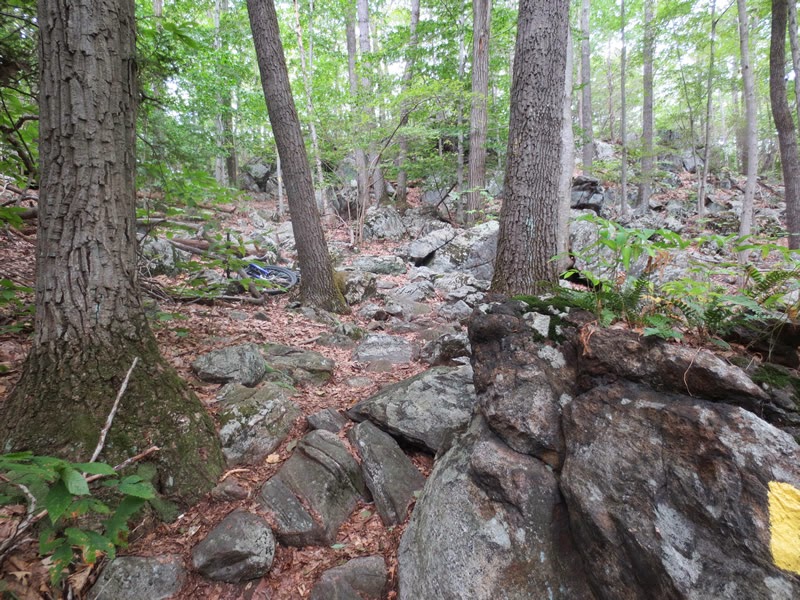 It was treacherous for a long stretch and although I was intending on going to the Ives Cottage Ruins, I decided  instead to take the Blue where it turned westward. It was partly down the rock strewn hill but once I got going on it, it was a little easier. There where a few ball breakers thru this stretch as well!

Rugged Rock Strewn Trail - Hike a Bike for Me :-(

Finally I took a breather where the Blue met the Red. Carrots in my Camelback hit the spot! 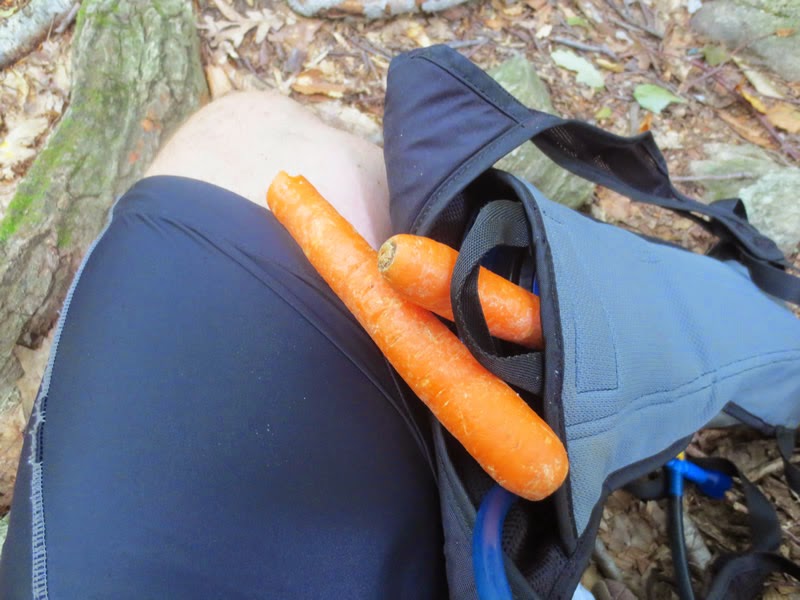 Lastly, I rode the Red back westward and settled in a little better - this was more my level of riding although there some tricky sections there as well. This park will waste you - the scenery is rugged and awesome but the trails are tough: rocky and super hilly much of the way. Flow is few, but stamina, fortitude and balance is mandatory! 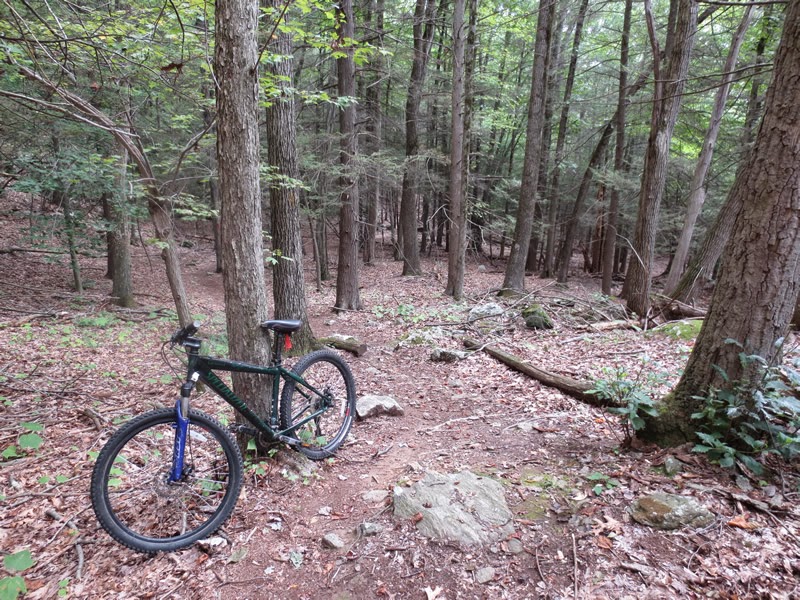 where the Red meets the Blue...

Posted by Rich Coffey at 6:50 PM No comments:

It's been ages since I posted here. Not that I haven't been riding - it's just that there was nothing new to report. I have been riding Trumbull (pValley), Mianus, Colonie and Luther whenever I had time but today's ride was a bit usual as my FSR XC was busted big time - the H Link cracked and it'll take a month for the part to come in.

So rather than go stir crazy I took a different tact..

It was a retro day - my bike was a jerry-rigged old hard tail and my phone an old flip phone! Nevertheless it was a fun day and brought me back to then times I rode here with my son ages ago with the same bike and phone!

I took a short rest by the water’s edge at this lovely little spot… maybe some of you know it? You can sit on the tree trunk and there is a root protruding from the riverbank that’s a perfect spot for your feet! The photo is kinda crappy and doesn't do the spot justice! 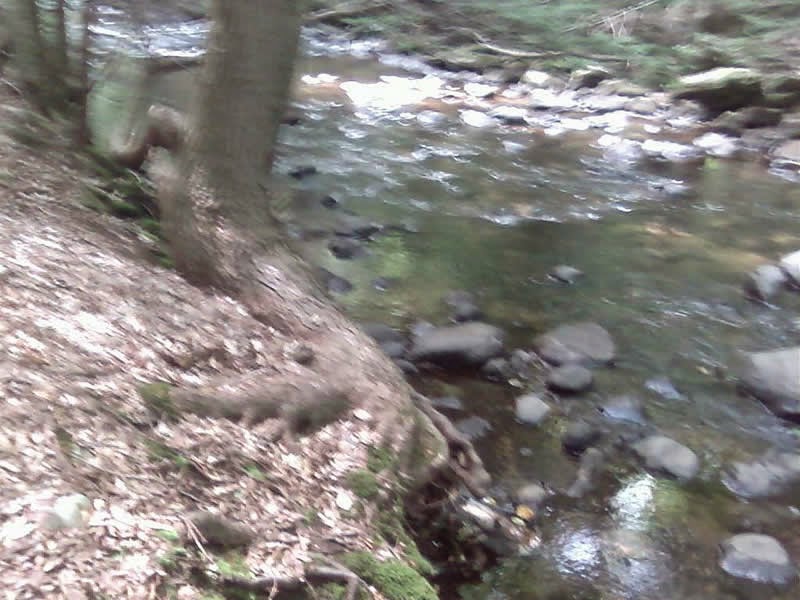 I ventured down by the river near the old crossing in the middle of the park - right where the Serengeti begins. I was able to walk out on a sandbar (actually gravel) to get this shot. It came out not bad considering it was the flip phone camera. 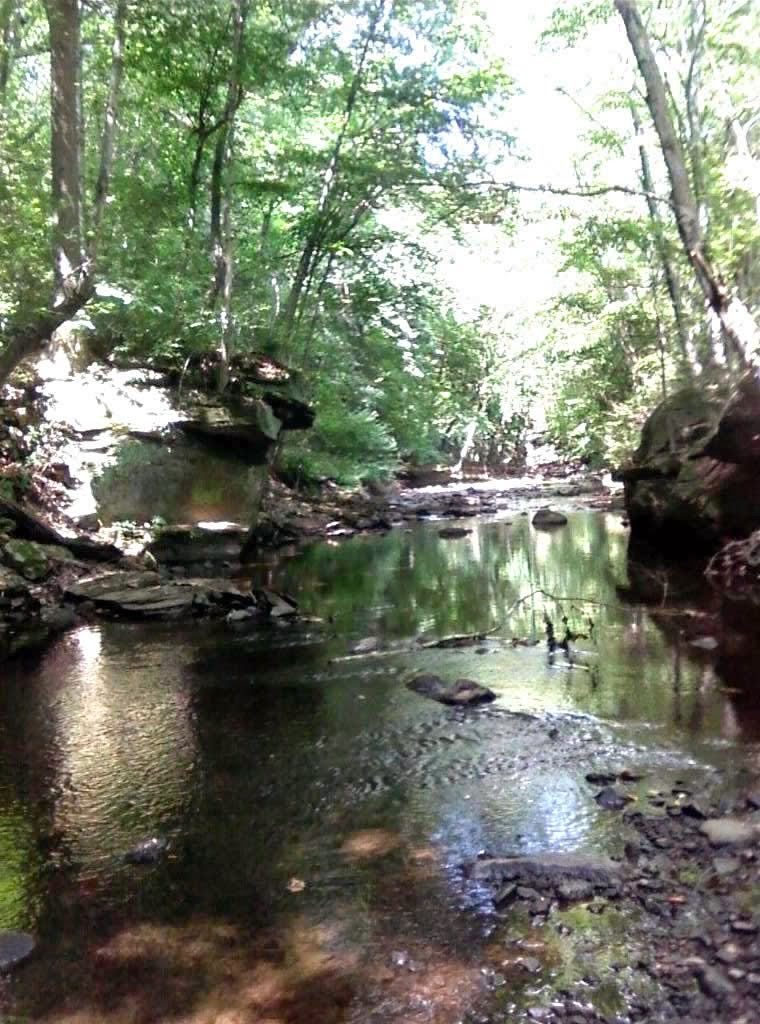 I of course had to ride up to the Central Maze and do the Yellow Slab Rock section. I found out surprisingly that the heavier hard tail was actually a little easier to ride in spots - there were more lower gears I guess so the hills didn't seem as bad. But the rooty sections were rougher on the butt for sure!!
Posted by Rich Coffey at 4:50 PM No comments: