Didn't get out to the park until after 2 pm but I still had a nice ride. The weather was a typical cool sunny autumn day and the park was pretty empty (most folks go in the morning when the light is better).

I went in from Daniels Farm (south end) for a change and rode the Blue/White.  Just north of the Serengeti--by the climb up to the "old overlook"--I saw a snake. 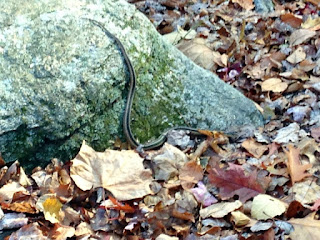 I  rode on and at the North Bridge I stopped to take a photo - she looked beautiful in the late afternoon sun.:-) 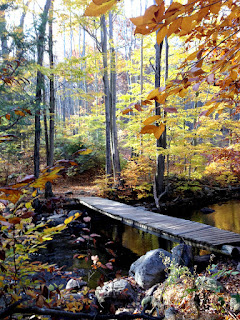 I continued my ride along the river and went up to the Playground passing the old rusty car chassis. From the Playground, I took the Red and once past Copper Creek, the back trails of the Central Maze swinging over to the Yellow once I came to the circle at LFR. I saw a couple of large white-tailed deer on the next stretch -the Yellow to the Red at the FireRoad.

Riding down the Red to the bottom of the chute was a blast--I forget how much of a descent it really was. Here I veered off towards the Yellow by taking the trail that parallels the FireRoad. I then stayed on the Yellow the whole way back, shamelessly walking most of Mulholland Drive (I am getting old!)

It was a nice ride and so good to take a route I seldom go!
Posted by Rich Coffey at 5:53 PM No comments:

Just Up the Street... 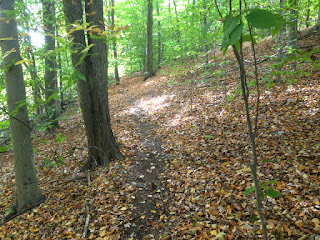 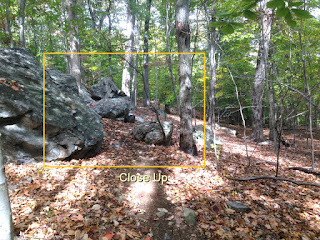 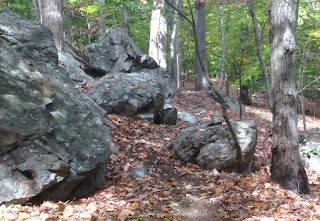 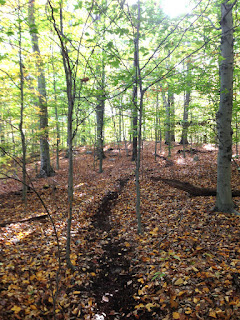 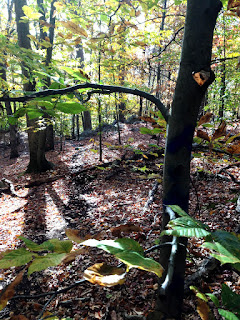 Posted by Rich Coffey at 1:45 PM No comments:

While the weather is nice - I am itching to do these urban treks on my lunch hour - they should be fun :-) 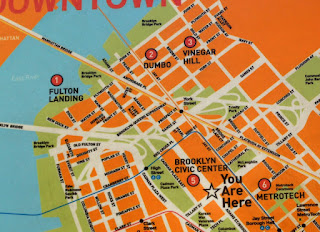 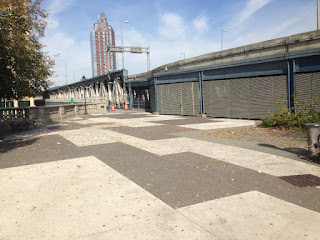 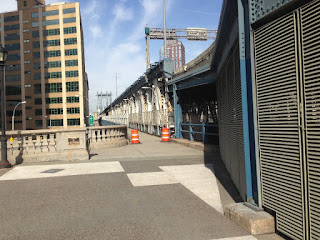 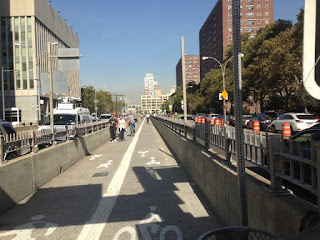 Google Street View >
Posted by Rich Coffey at 5:00 AM No comments:

Deer and Crows (sight and sounds)

Spent a little time in my neighborhood park fixing up the trails. The shot below is along the river - mighty purty wouldn't ya say? 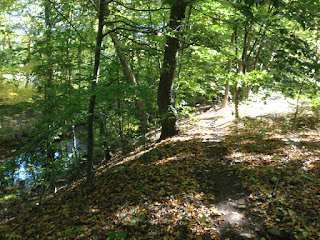 The weather was real nice so I decided to create a couple of new short loops and spent some time digging and adding rock to a soft spot.   I had a couple of visitors -- Momma and child watched me for about 10 minutes! 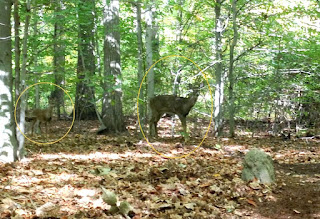 I then headed over to Trumbull and enjoyed the cooler weather. I discovered ancient stunt ladders from days long ago - It was like finding a fossil! 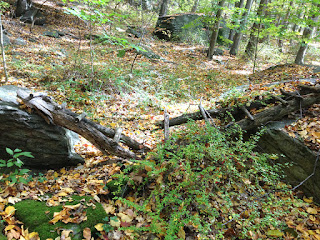 Near the north end,  the crows were unbelievably raucous - never heard anything like this before. Led Zeppelin step aside - these crows might have you beat in decibels! :-)

Posted by Rich Coffey at 6:45 PM No comments:

On my way home from Upstate NY, I stopped at a small park in Pound Ridge NY and took a quick hike. The park is called Carolin’s Grove. Info > 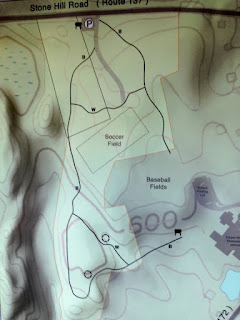 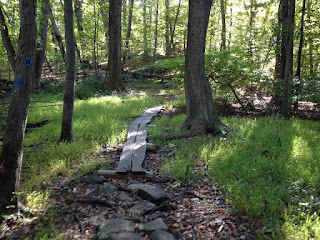 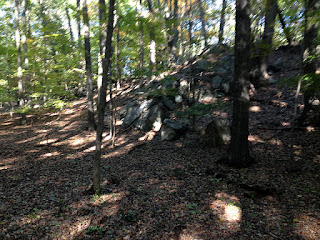 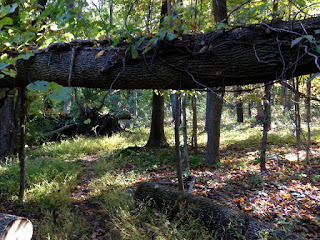 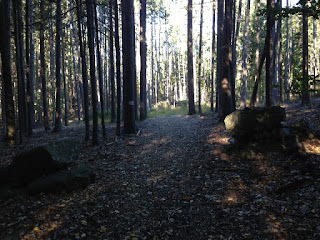 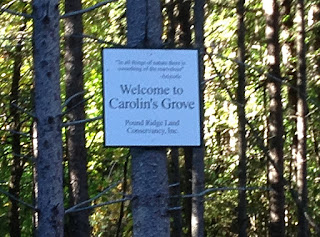 Posted by Rich Coffey at 2:57 PM No comments:

Quick Hits at Luther and Colonie

I was upstate for the weekend to visit my parents and popped out for a couple of quick hits on my mountain bike.

Man it was chilly to start off - I almost wish I had full fingered gloves but after about 20 minutes or so it started to warm up. My morning ride took exactly one hour - I rode the whole park. Also had the good fortune of seeing a deer. She whizzed by in front of me on one of the ravine trails. :-)

I did a 40 minute quickie over at Colonie mid afternoon. The weather still was a bit chilly but the riding was fun. The three panoramas below are two-photo combos.

A Stewarts Mountain Brew - I am at the7 Rt 9 Mohawk River Crossing. 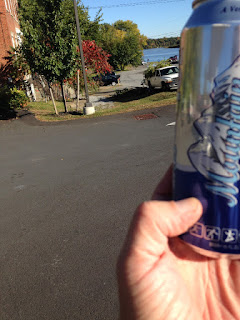 Posted by Rich Coffey at 6:25 PM No comments:

Today on my lunch hour I took a brisk Urban Trek and walked to the Manhattan Bridge.

Getting to the walkway/bikeway was strangely vey difficult - I ended up hopping over a fence but it was great to see so many bicyclists out on a beautiful day. 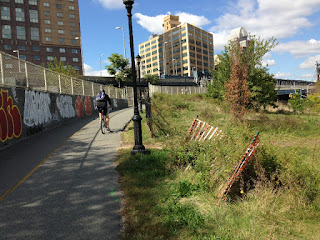 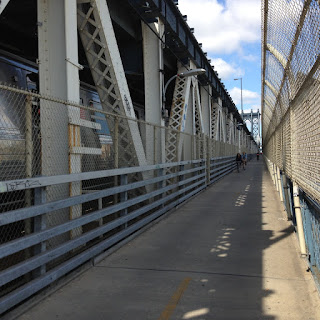 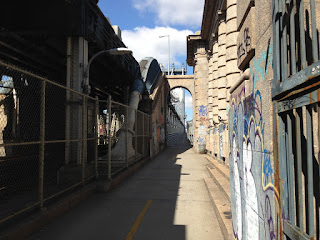 The fence blocked the photos a bit but it was nice to get to the point where I was actually over the water. I couldn't linger long -- it was my lunch hour -- but the weather was beautiful and I worked up a sweat walking so briskly. :-) 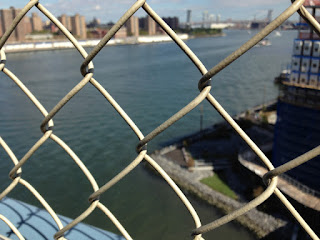 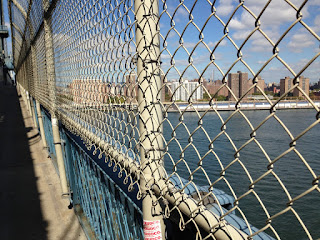 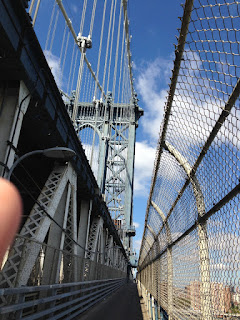 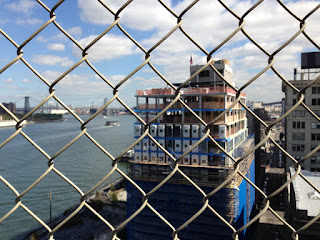 On return I snapped a photo of this section - it was actually majestic in an old-fashioned way. There were steps in each grotto to sight-see over the edge but sadly they were fenced off... 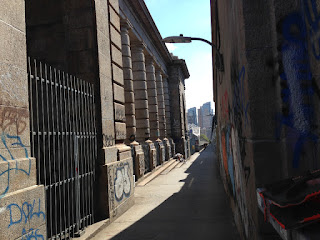 Posted by Rich Coffey at 5:33 PM No comments: