It was cloudy but quite pleasant and cooler than normal for this time of year.

I rode the lower trails in the morning, warming up with a quick bomb on the easy Greenway then riding Stepping Stones and Chuck's Corkscrew in both directions. 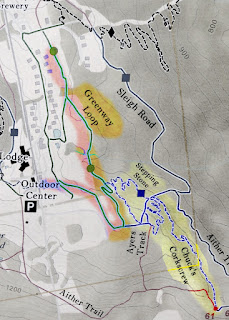 In the afternoon, I rode Sugar Road and the lower trails for starters but they were just boring fire roads. Lodge Spur was a wicked climb but only the tight switchbacks gave me trouble. I learned it was best to lower my seat around these tight curves on a steep climb. Keeping your center of gravity lower helps a lot. 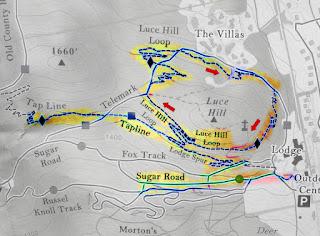 Once on the Luce Hill Loop, the trail is kinda tough with lots of roots and tight curves.  The dearth of photos is due to the fact I had taken photos last year* and since much of the trail really flows, you don't want to break the momentum to stop for a photo.

Once around the loop clockwise, I continued on up on Tapline and turned around a little after the series of tight switchbacks photographed below. It started to get dark--I thought rain was coming--so I high tailed it down the mountain, but alas... no rain occurred... 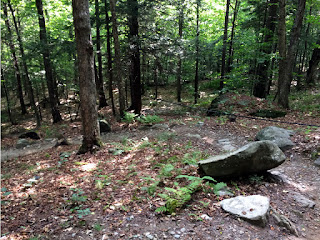 These are great trails!

----
* Click on the Trapp Family Trails keywords to see other posts on these trails
Posted by Rich Coffey at 3:16 PM No comments:

Once a year, our family gets together at the Trapp Family Lodge in Stowe. An annual week timeshare arrangement is a lovely way to revitalize the family bonds and do a variety of outside activities together (mountain biking, kayaking, hiking, "road" and rail trail biking, etc.)
I took a morning warm up bike ride on the Greenway Loop...

After riding a bit of Pipeline (more challenging single track), I looped back on Sleigh Road when I got a flat tire! Bummer- I didn’t have a spare tube (duh!) and the walk back up to the lodge was a brutal uphill - oh well at least I got a good amount of steps on my FitBit :-)
We took an excursion up north to Morristown to visit an eccentric artist's house. Her rock arch work was featured on Oprah.
The side trip I took up to Smuggler's Notch with my sister was simply awesome. This place was incredible! Massive boulders are scattered in a narrow passageway over the mountain, creating nooks and crannies everywhere. There were all kinds of trails scattered every which way, weaving thru the boulders and it was easily 15 degrees cooler in the crevasses. 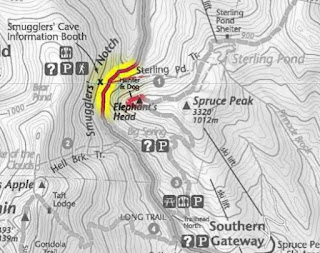 Posted by Rich Coffey at 4:53 AM No comments:

After my fiasco a couple of weeks ago at Trumbull where I needlessly got all banged up from my worn out shoes -- I bought a new pair and am back in business...

It was a beautiful day: vey sunny and a little hot but the humidity seemed tolerable for a change. I decided to skip Trumbull today and head back up to Farringtons and hit Huntington as well.

The parking lot at Farringtons was crowded like I have never seen it. Turns out it was a Boy Scout Troop that had just finished exploring, clearing and GPSing the hiking trails. I said hello and mentioned I had already made a bike map of the park. The eagle scout and his Dad have a project with the city to create a map for the kiosk. Some of the old hiking trails (mapped here) will finally be official!

Anyways, I stopped for the usual photo op by the lake and a little further on, I saw a red fox scamper by. Once again, I didn’t attempt the mountain trail and just rode the lower trails. I was the only rider in the park! It started to get hot and I was ashamedly already getting tired…

I let my phone GPS guide me to Huntington and it took a little less than half hour. I parked at the upper Dodgingtown’s lot. It was pretty hot by now. I rode straight in to Stratocaster and did the loop counter clockwise. It is such a great trail!

I noticed some new stunts and they looked doable by an XC weenie rider like me. This is a great spot to hone your skills (I hope to return on "off hours" to do just that :-) ) 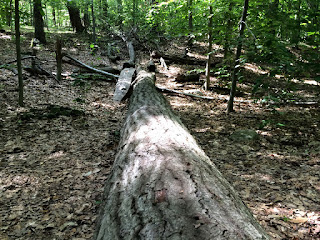 I did do the easier short flat one - Blink and You'll Miss It!

I stopped for a breather at the intersection where Stratocaster veers off from South Pond and snapped a photo. Its a really excellent trail - just check out the contours of the hill ascent - total PRO! 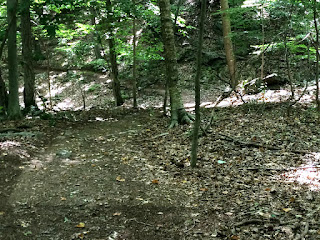 Although I helped construct this trail, the real kudos go to those who planned the route. Thank You FCNEMBA and CT NEMBA trail planners!
Posted by Rich Coffey at 5:46 PM No comments: