Indian Kill - What Was I Thinking?

I was up visiting my parents for a short weekend and had to get outdoors for a bit (cabin fever!). It was cloudy and gray and very unexpectedly snowing but I ventured out anyway...

It's a toss up whether I was brazenly courageous or a foolhardy idiot for this trek--in retrospect - it was INSANE!! Who would of thought this relatively easily park to hike in would be so ridiculously dangerous on this day?! Oh well - nothing like a good adventure to remember when I am in my rocking chair...

As mentioned, the weather was very crappy - cloudy, dull and dray with a light but constant snowfall. 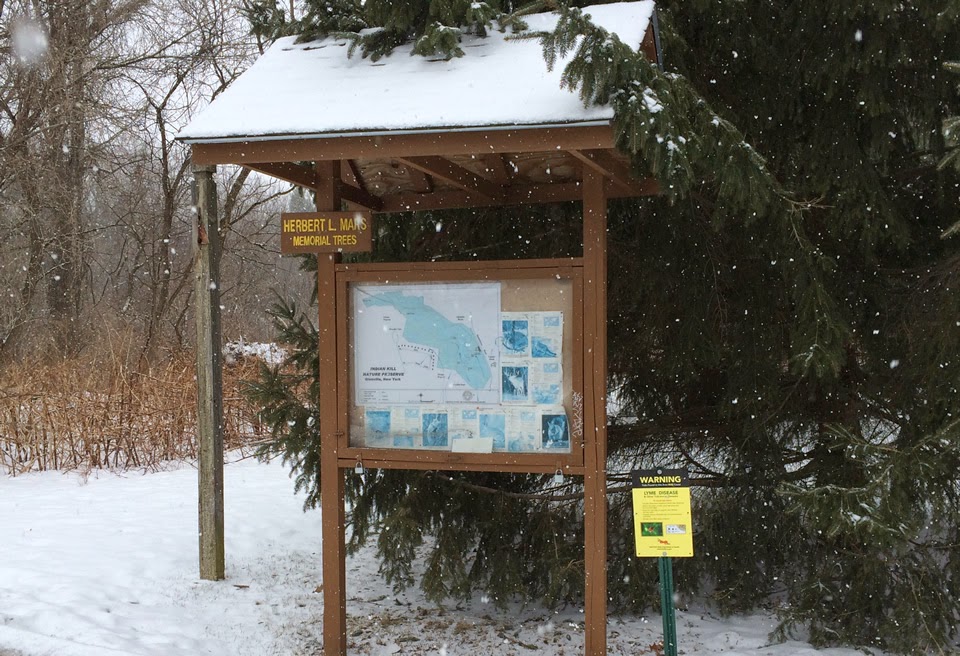 I took a short detour at the start and saw a tepee... 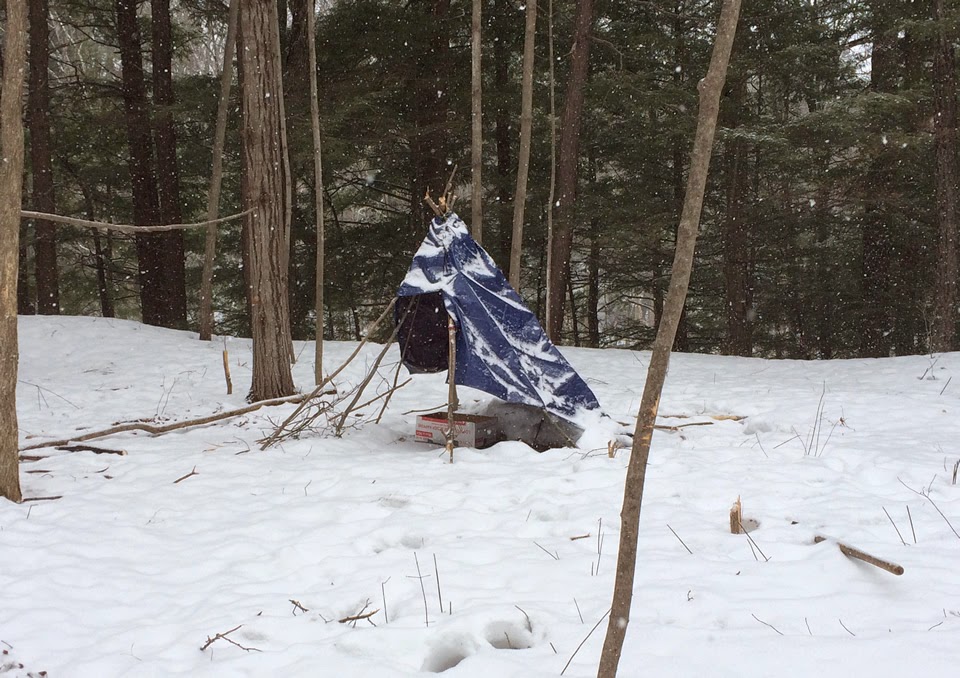 And getting down these slippery steps were a little tricky, 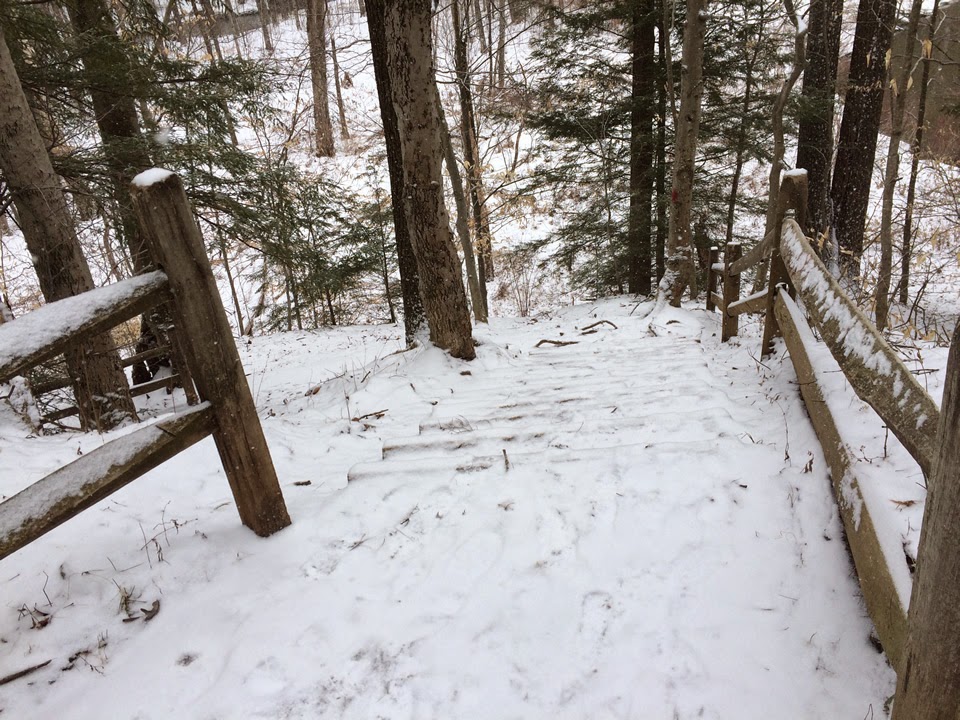 Once over the dam... 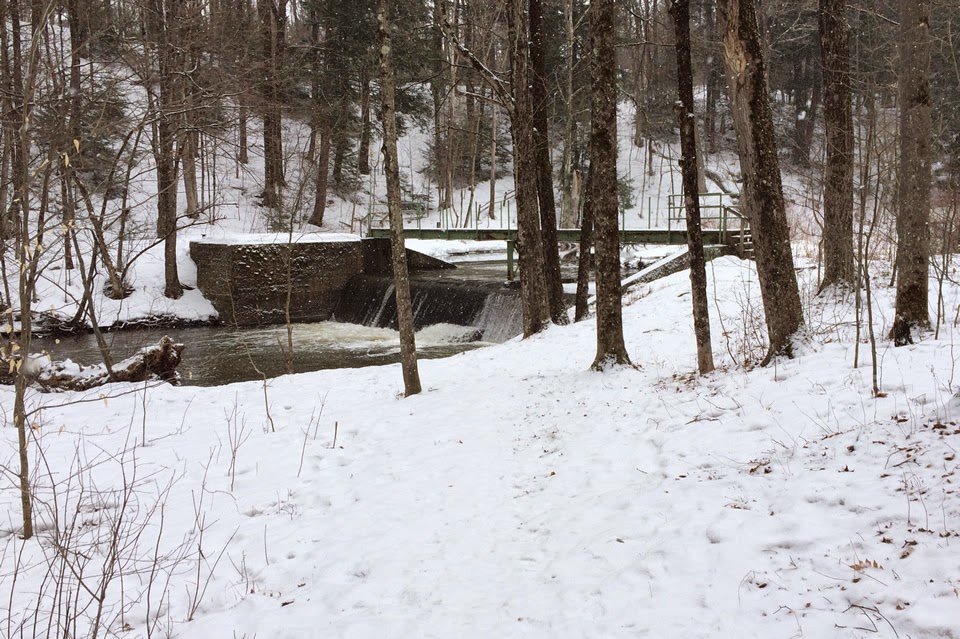 ...scaling this climb looked easy but it was solid ice under a thin layer of snow so I took a couple tumbles before I learned my lesson! 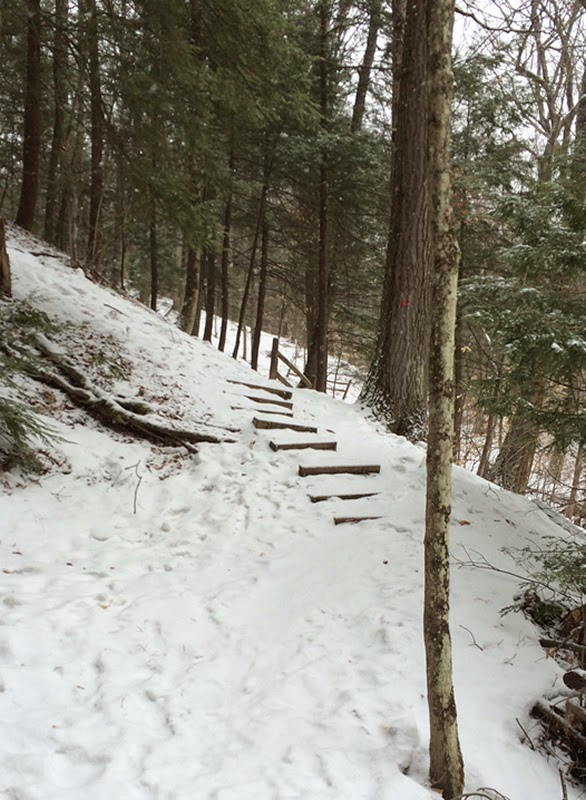 As always, the forest has it charms... 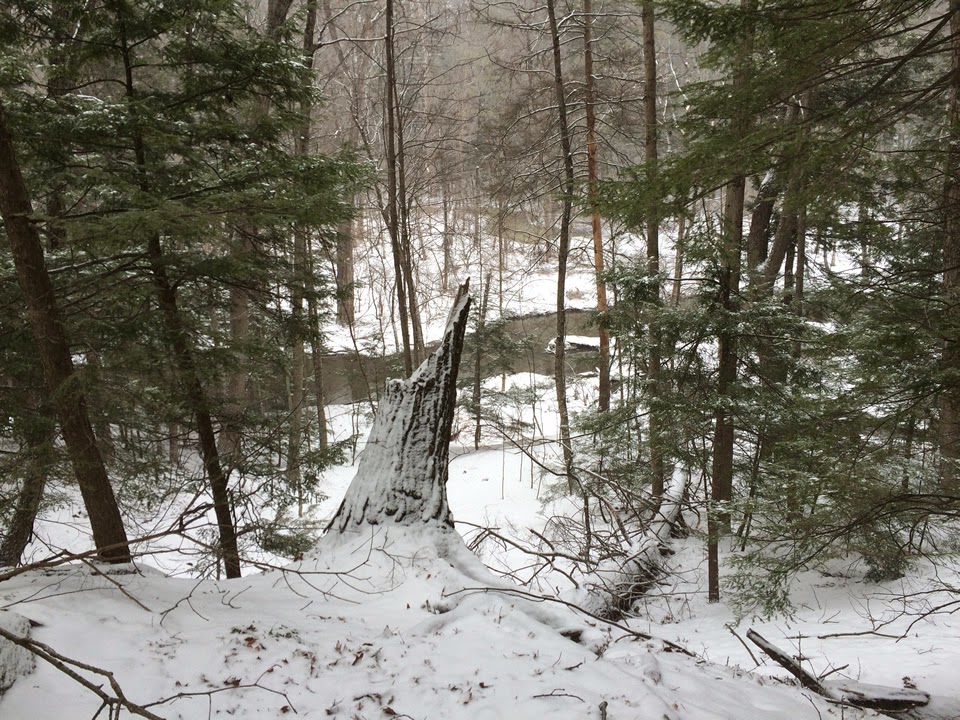 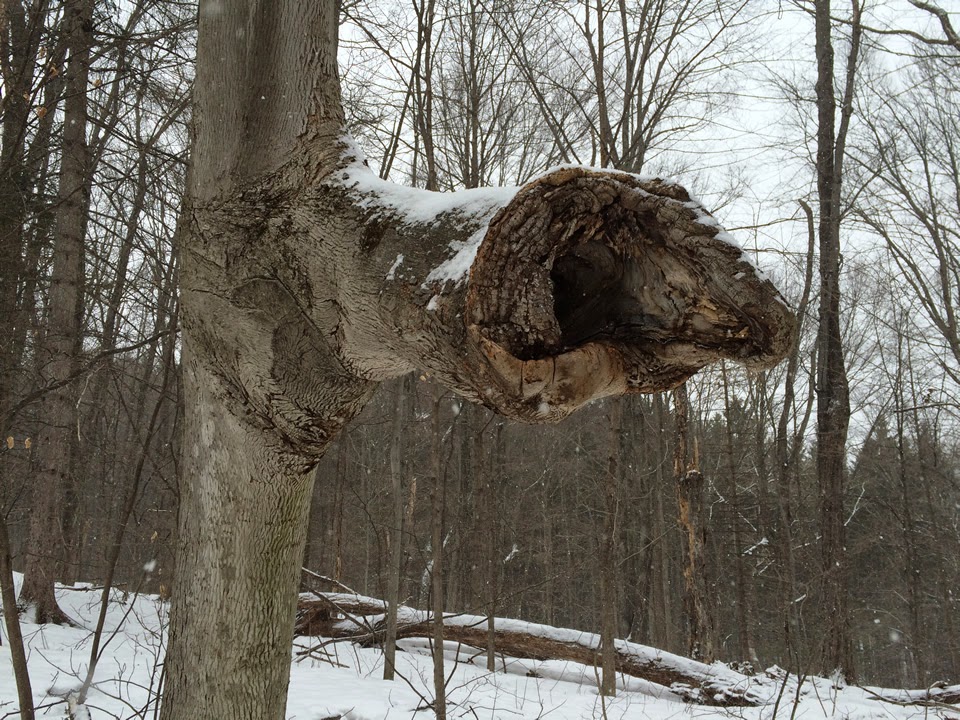 Didn't venture down this trail but loved the view thru the trees... 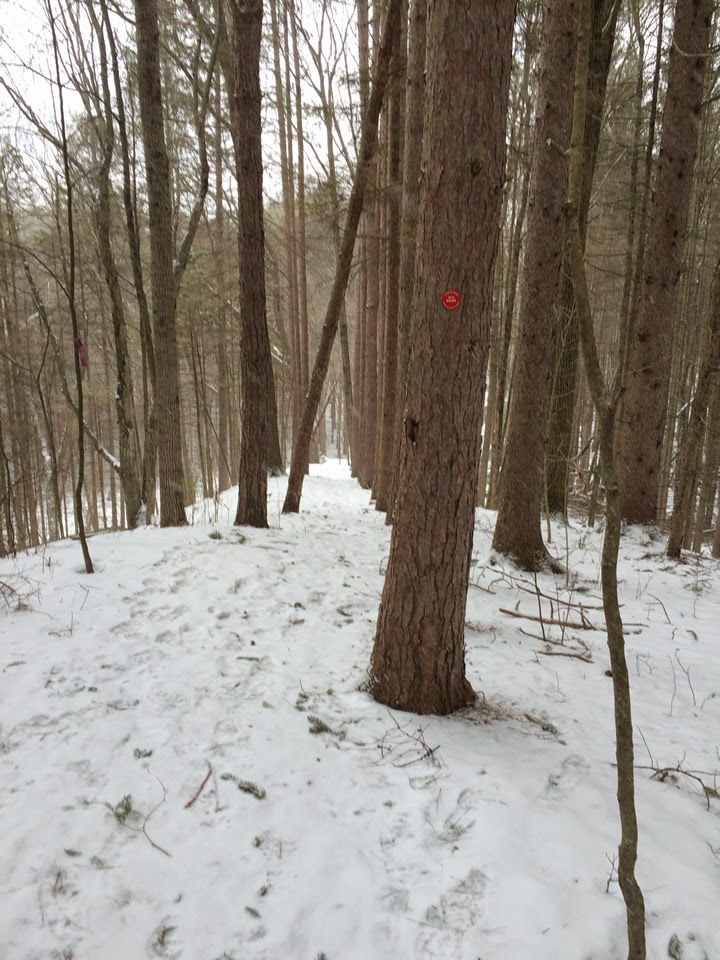 After a seemingly long trek over often icy ups and downs, I arrived at this picturesque spot. I spoke to the folks who told me the last little trek down to the water's edge was way too icy to attempt unless I (1) slide on my butt; or (2) hike up over the next hill and wind my way down from the other side. 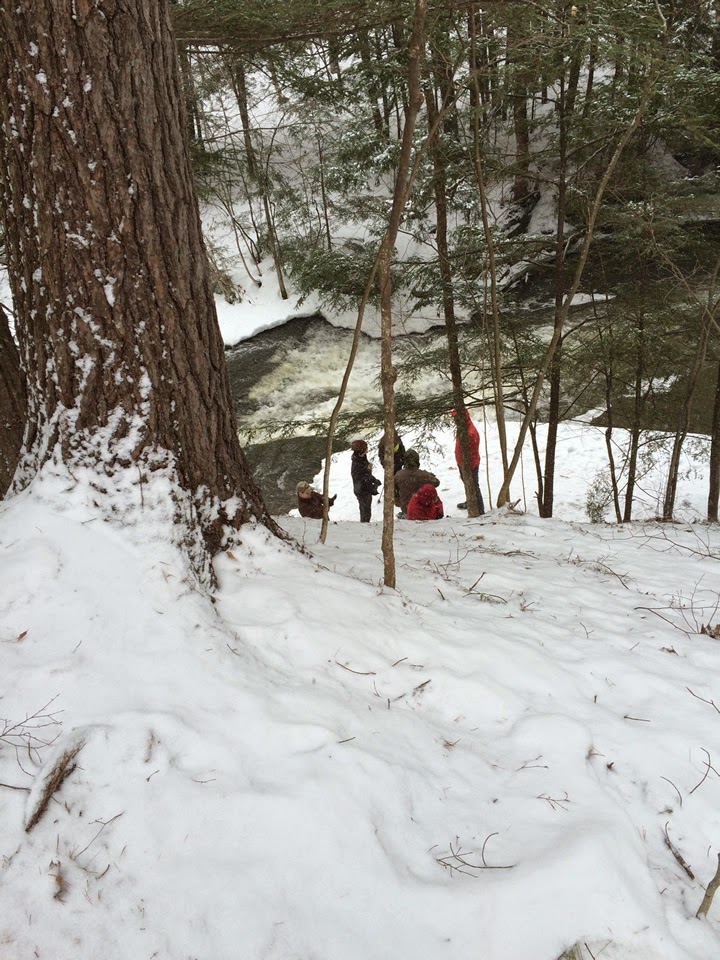 I decided to climb up and soon found myself at the back of the Woodlin Club but still needed to trek much further to find the easy descent back to the spot... 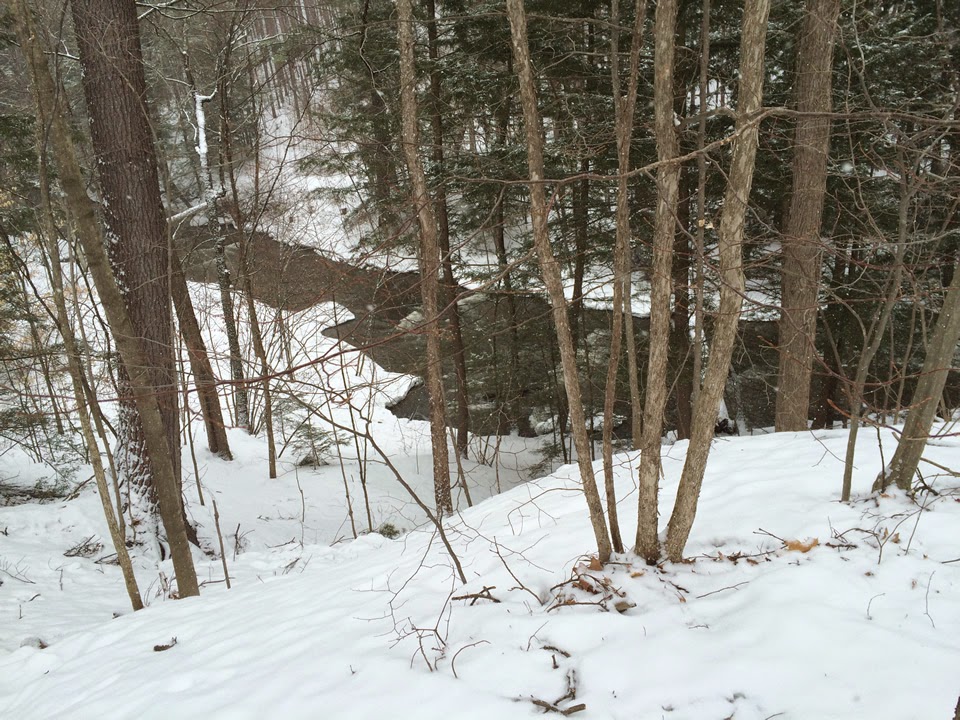 So I just trekked back down how I came and watched the folks stumble and struggle to get out of the spot. It turned out it was a Boy Scout hike! We spend some time talking and I ventured close enough for this shot before heading back... 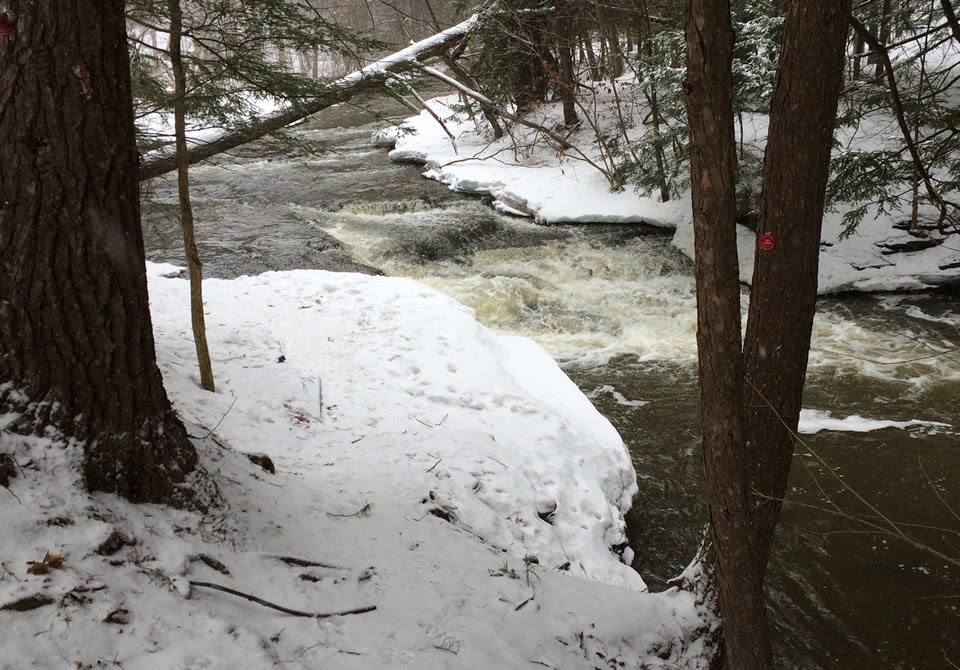 My Return
I took the route back closer to the river thinking it would be easier - one butt slide to descend to this trail wasn't too bad (so far!) 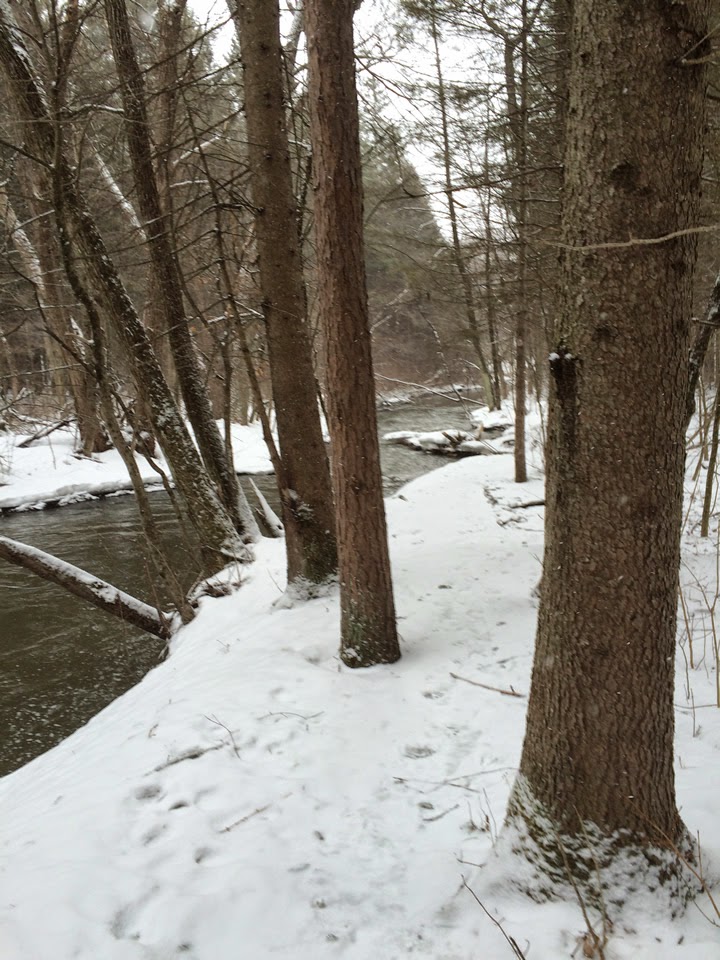 Super Short Video
The Red Trail turned into the Blue Trail and slowly got a little crazier due to the extremely slippery conditions. It didn't look that bad but right beyond the pine tree (see photo below) was another 10ft short ascent of sheer ice. Leaning way down and carefully holding on to stumps and trees got me thru that one... 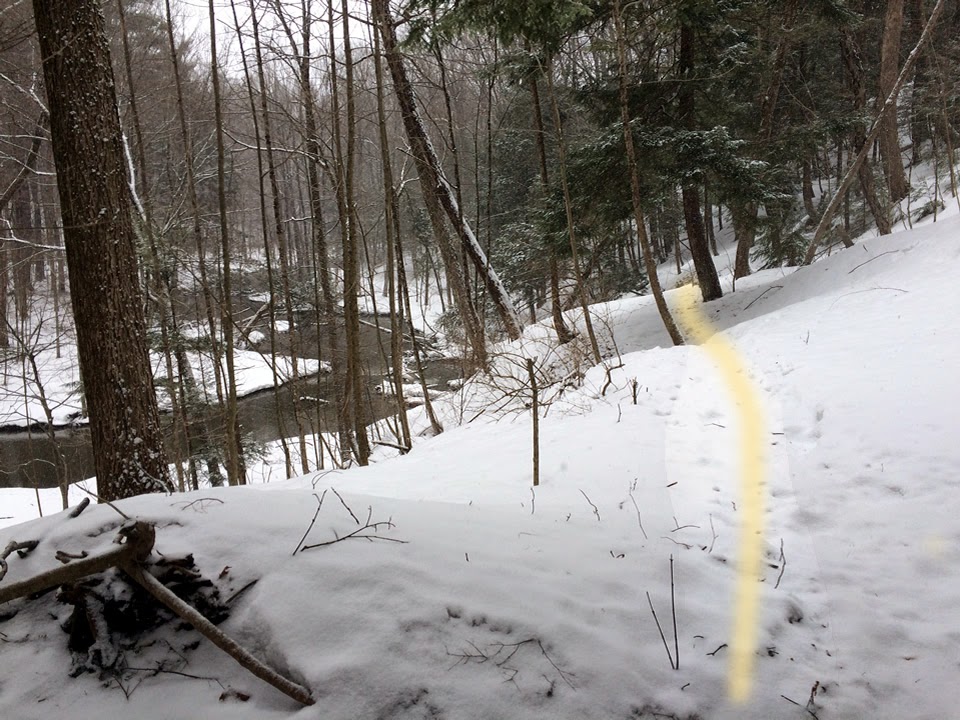 ...but the final challenge was soon to come.  An approximately 30ft ascent with roots here and there looked doable but I ended up having to slither up on my stomach and pull myself up by any root I could hold onto. The last stretch was the worse as there were no roots and only ice!! - I had to slither along inch by inch and felt at any moment I might slip and end up sliding down the whole ascent. Yikes - I kid you not - this was a toughphie! 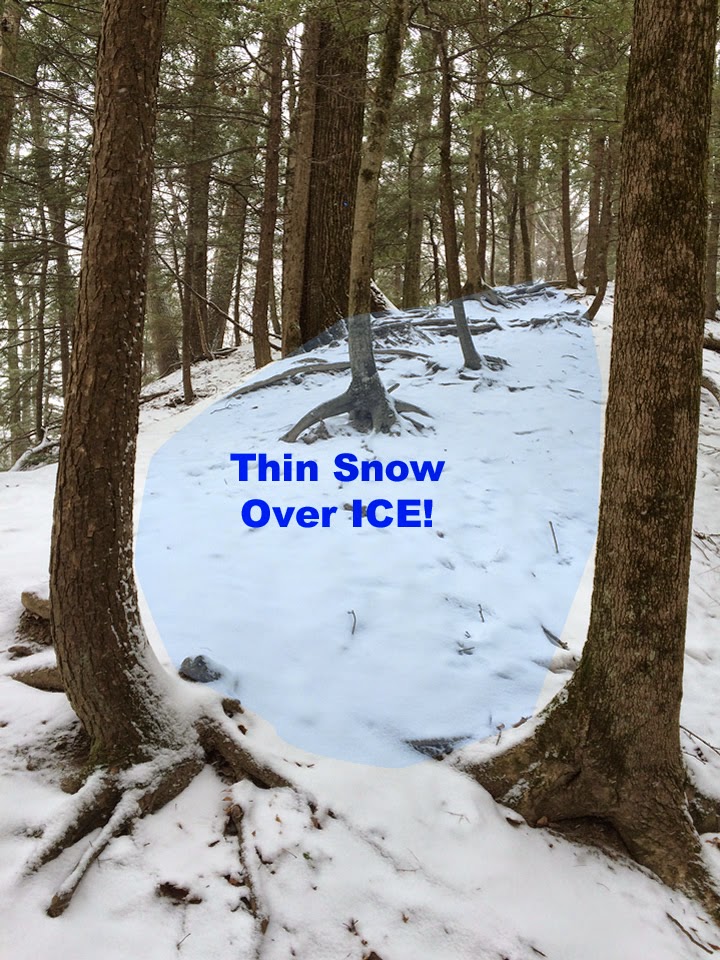 Phew - I made it -- snowy clothes but no broken legs! 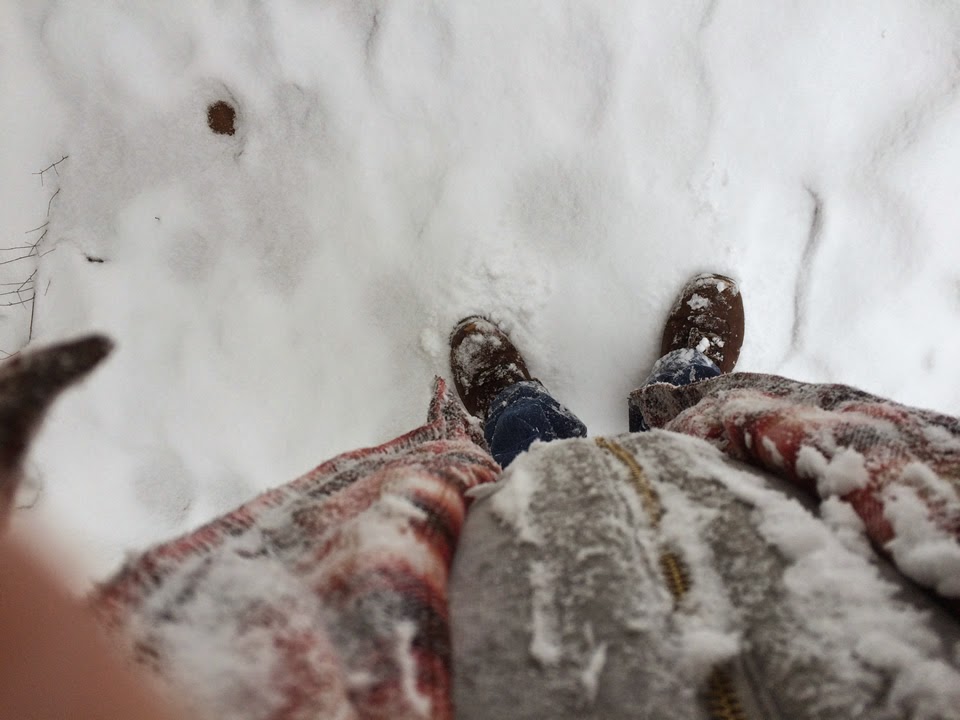 What could get worse - How about getting lost in this blowdown! 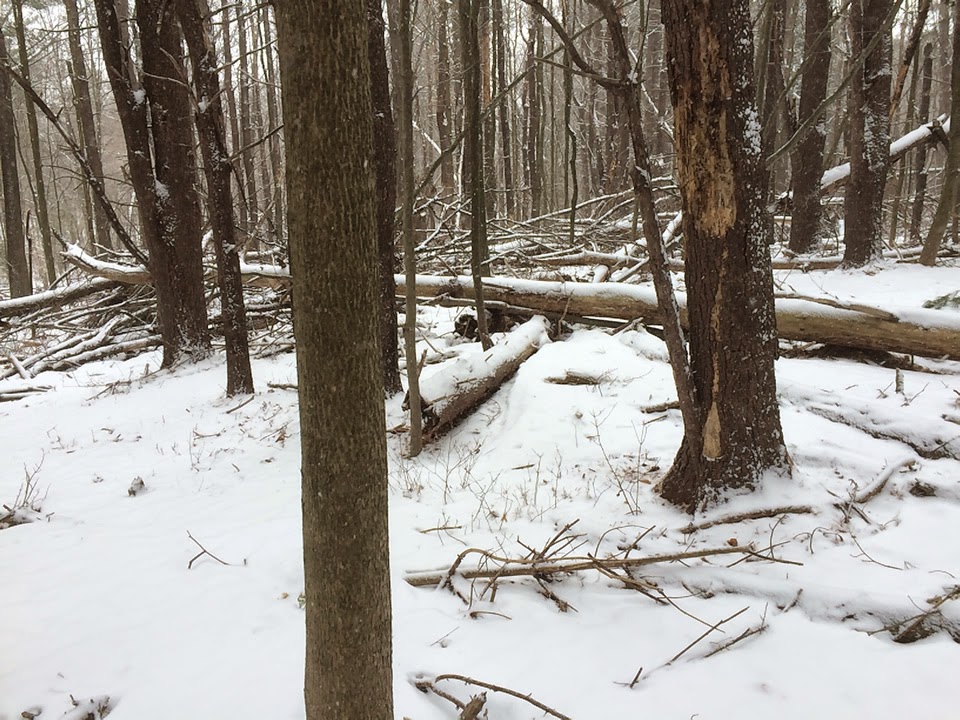 I ended up at the back of the Sanatorium! Wow - I was always curious about this place so at least now I finally got my curiosity satisfied! It is a beautiful series of buildings. 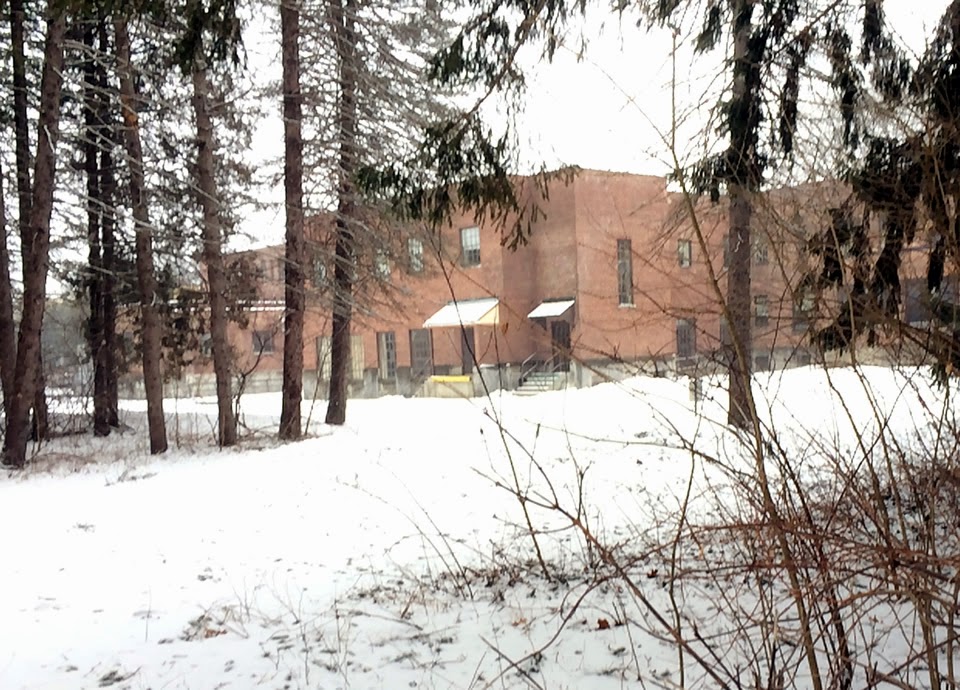 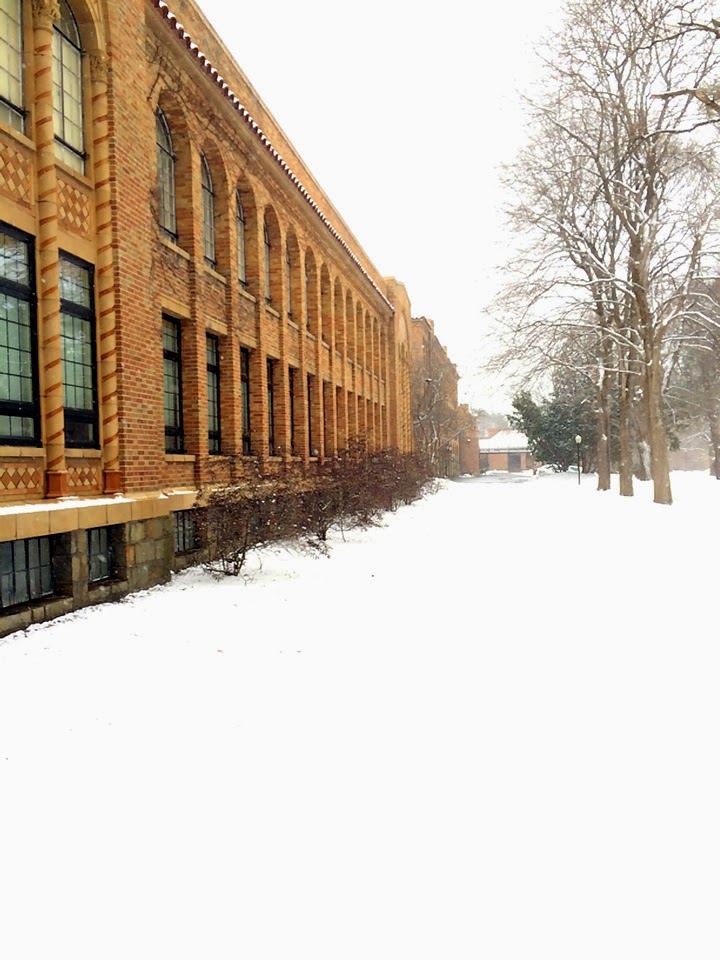 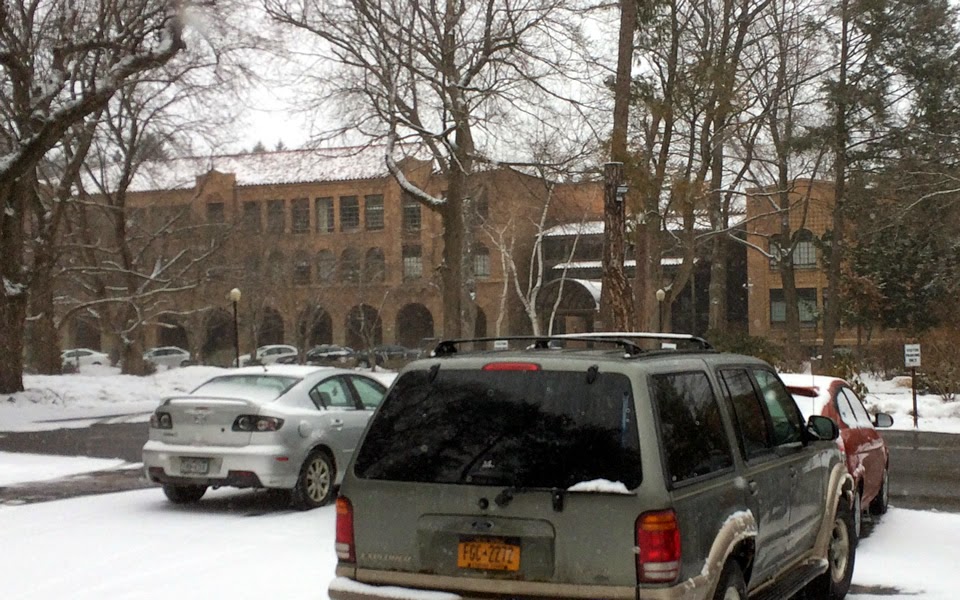 All in all, quite an adventure for simple ol' Indian Kill. That was my morning adventure but I was still longing for more so I ventured out in the afternoon as well. Check out my afternoon trek(s) >